Designer
Tim Ahrens
Foundry
Just Another Foundry
Classification
Sans Serif
Featured in
Typefaces of 2012
Elsewhere
Bernina Sans in use, Bernino Sans in use, Review at MyFonts.de (archived)
Get the Fontsi

Like it or not, much of modern life is lived through a screen. We navigate our world via an omnipresent system of menus, lists, buttons, and other elements that we scan all day, every day. In many ways, the operating system is the environment we live in — and type is at its core. Many of us interact with this sort of type more than any other — by a long shot. Despite all this, it’s a category of typography that is rarely discussed.

Of course, one of the reasons for this is that we have little say in the matter. We are, for most practical purposes, at the mercy of the OS manufacturer. For Mac users, this means OS X, and the unsung wonder that has served as its face since the beginning: Lucida Grande.

Setting aside, for a moment, the recent (ill-advised) switch to Helvetica for apps like iTunes, there are good reasons why Apple has stuck with Lucida. Not only is it structurally ideal for the screen and the kind of scanning and reading that goes with using an OS, but it also fits comfortably with the aura and personality of OS X: professional without pretense. An OS typeface must be invisible — even more so than a book face — and Lucida Grande is invisible because its stylistic character is so right for the system and because its functional character is perfect for the job. It does what Apple’s best products do: it just works.

JAF Bernini Sans is that kind of typeface. It works like an involuntary muscle.

One doesn’t have to go far to find a prime example of what I mean by this. It’s right here on this very page. Most visitors won’t notice that Typographica.org switched from Lucida to Bernina Sans for all the small type on the site. That’s just how we want it. They won’t notice because Bernina has much of the same humanistic modesty. But as the makers of the site, the thrill of this change is that we now have the added flexibility of italics, which are included in the Lucida Sans family but missing from Lucida Grande.

Visitors won’t know that the Bernini webfonts come in a perfectly graduated range of weights. But that aspect was certainly useful for us when we found the Bold to be just a tad too heavy for our tiny stuff, so we simply switched to Semibold which still had enough heft to contrast with the Regular.

Readers won’t know that screen proofing and hinting was an integral part of Tim Ahrens’ design process. They’ll just be able to read it with ease, even with a dusty old Windows machine. Even the most observant and jaded type users probably won’t notice that Ahrens’ goal was to combine open apertures with round counters. They will simply find Bernini to be pleasantly legible and stylistically versatile.

As JAF Bernini Sans pervades the design landscape, I envision multitudes of scenarios like the one we experienced at Typographica. This broad and well-considered family is a typographic framework that will enable designers to simply make their thing — whether it’s a website, a wayfinding system, a corporate identity, an e-book, a magazine, or a dialog box — while the reader, the user, is blissfully unaware. All they’ll notice is that it just works.

Stephen Coles is the editor of Typographica, Fonts In Use, and The Mid-Century Modernist, and author of the new book The Anatomy of Type. He works from his girlfriend’s flat in Berlin and his cat’s home in Oakland. 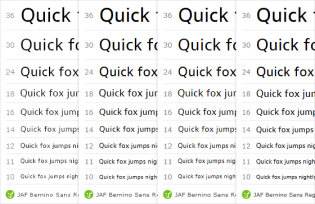 The differences between JAF Bernina and JAF Bernino. Image via Florian Hardwig, MyFonts.de.

JAF Bernini (right) combines the rounded counters and smooth shoulder joints of a Grot like Helvetica (left) with the open apertures of a Neo-Humanist like Novel Sans (center) Image via Florian Hardwig, MyFonts.de.