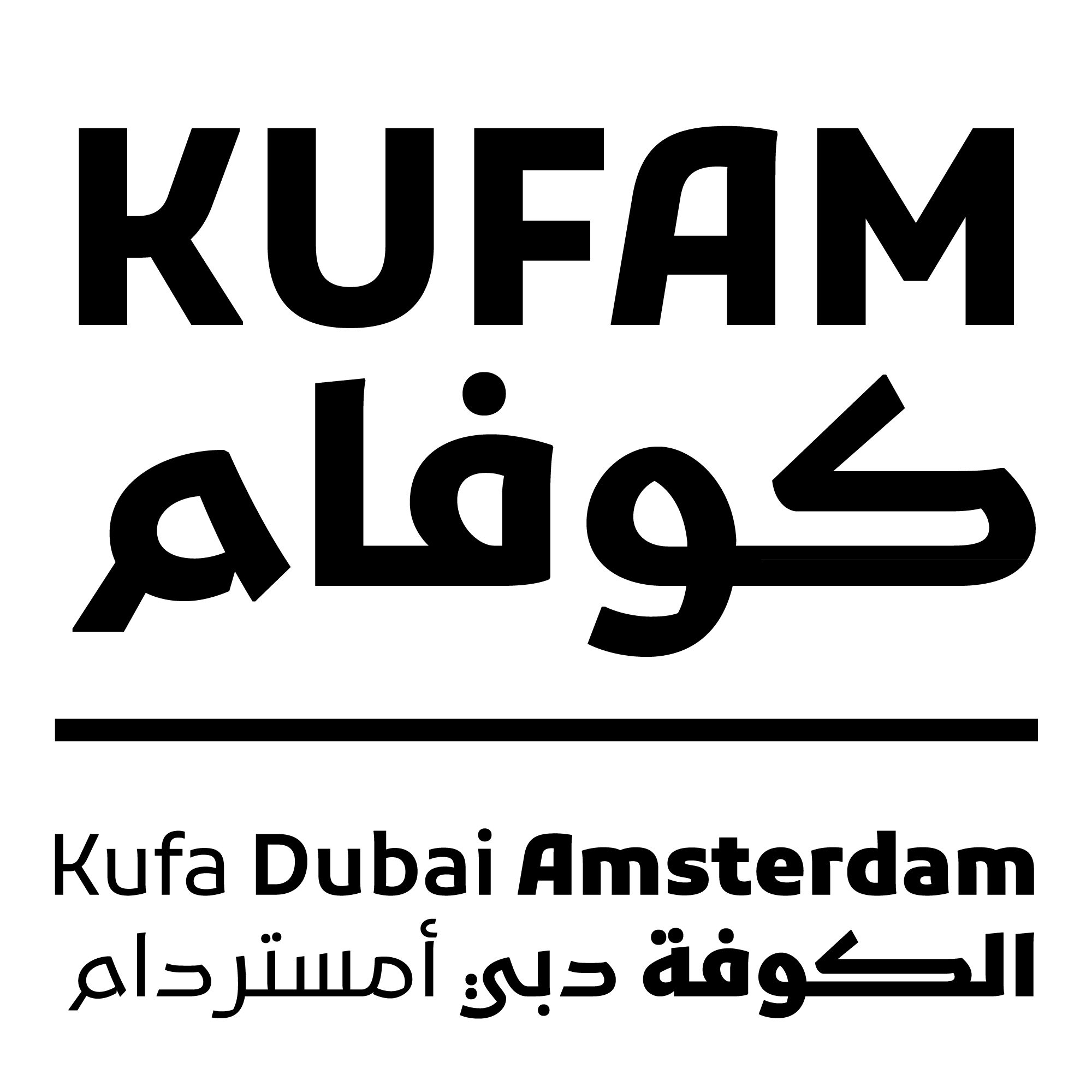 Kufam Arabic first grabbed my attention through its varied horizontal rhythm. While many contemporary interpretations of so-called Kufic tend to present prevailingly narrow letters, Kufam pleasantly alternates between narrow and wide letterforms. Kaf, Sad, Seen, and the final Beh — along with its siblings of various dot forms — lend the line of text a dynamic variation [a].

Looking at the form of the Hah and the Dal, we note how much they differ from one another [b], eliminating a common pitfall in other contemporary Kufics that don’t grant enough importance to legibility.

The overall look of the page is reminiscent of the type of Kufic that was chiseled in stone, and not drawn by the pen. The outlines are of uniform width and the corners angular, granting the script a monumental feel that is most appropriate for headings and display. The minimalist descenders of the final forms of Yeh, Lam, Hah, and Ain lend the period style more authenticity and coherence.

Wael Morcos has also made our reading more pleasant by clearly differentiating among the medial forms of Feh, Ain, and Meem, avoiding a common fault of other Kufic interpretations [c]. After reading a line or two of text, we need not hesitate to distinguish one from the other. The initial Seen presents a unique shape that cannot possibly be confused with the prongs of a Beh or similar letters [d].

The glyph set includes some wide letter variants that could be useful for variety or for line justification [e]. In addition, a select set of two-letter combinations can be used for a more refined look [f].

Now, how could Kufam be made even better? Just as the initial Seen has a unique shape, the onset of the medial Seen could be further distinguished, especially in proximity with Beh-like letters. The initial Heh has an unusual form that might be more recognizable if its vertical stem leaned leftward instead. The readability of words full of successive Beh-prongs could be enhanced by alternating the height of neighboring prongs [g]. Finally, making the final (connected) form of Lam-Alef similar to the stand-alone form [h] would be more consistent.

Overall, Kufam succeeds as a fresh, modern, and credible interpretation of engraved Kufic.

Kamal Mansour’s studies have spanned computer science, linguistics, and product design. Employed at Monotype since 1996, he has contributed to the creation of Unicode-compliant fonts for the many scripts of the world, including Bustani, a 2016 Typographica selection.

Huda Smitshuijzen AbiFarès, the curator of the Khatt Foundation’s Typographic Matchmaking in the City project, described the charge given to its organizers and designers as follows: “Design type or lettering systems for use in public space that can enhance placemaking in an already visually (and specifically typographically) congested landscape”.

In doing so, they hoped “to introduce a different approach to lettering” that would “create an alternative kind of typographic public space, a new form of physical urban poetry”. But, as with the first iteration of the foundation’s Typographic Matchmaking project, the overarching goal was to discover, through designing paired Latin and Arabic fonts, “whether two scripts can carry on a conversation on equal footing”.

In view of these goals, there are a number of qualities to appreciate about Artur Schmal’s and Wael Morcos’ contribution to the project, the Kufam family of Arabic and Latin fonts. Morcos and Schmal agreed that Schmal would wait to start sketching the Latin scripts until Morcos had generated his own initial designs for the Arabic. For inspiration, Morcos turned to Kufic, the oldest form of Arabic writing. Kufic styles, which date back to the end of the seventh century, tend to have lower stroke contrast than other forms of Arabic script, like Naskh. They are bolder, more linear and angular, and they rely more on vertical strokes. This is all especially true of Kufic’s more geometric variants, associated with public display and architectural lettering; to Morcos’ eye, it gives the style an unexpectedly modern flavor that he wanted to capture in his Arabic faces.

Schmal incorporated these features of Morcos’ designs into his own lowercase Latin forms most notably by leaving off the short stems at the joins between the curved and straight strokes typically found in b, d, p, and q, m and n, and r. They’re also absent from the a, the one-story g, and the stemmed u. But unlike typefaces with similar features — FF Dax being maybe the most well-known — even the lighter weights of Kufam Latin have markedly less stroke contrast. Schmal included more obvious formal references to the human hand in a gentle curve on the longer strokes, and a slight glyphic flare at the terminals, producing a gently puckered, almost beaky corner where the short stems would otherwise have been. (These features are also present in the Arabic faces.) The overall effect is to give Kufam more energy in its lowercase forms than Dax and other superficially similar typefaces have. Kufam’s roman faces are paired with obliques, which is a good choice — italic cursive forms, with their additional historic references, would have felt out of place. The obliques also help to reinforce in the Latin faces the more modern sensibility that Morcos found in his Kufic sources.

Kufam Latin’s uppercase shows the influence specifically of examples of vernacular public and architectural lettering found in Amsterdam from the 1920s and ’30s. Their key features are top-heaviness in letters like the B, P, R, and S, higher diagonal joins in the M and N, and the combinations of curved diagonal and straight vertical strokes in the A, K, V, and W. The slightly off-balance feel of the capitals and the styling of the vertical and diagonal combinations further helped Schmal to integrate Kufam’s Latin with its Arabic family members. These features are attractive and distinctive, but not distracting, even in all-caps settings.

I confess that part of my appreciation for Kufam in particular, and for the typefaces of the Typographic Matchmaking project generally, comes from their implied rebuke of kitschy “ethnic” display fonts, drawn (usually badly) to caricature the gestures of non-Latin scripts for Western audiences. And I’m grateful for any project in which people from parts of the world that humanity’s worst representatives are encouraging to fear and hate one another instead work together to make beautiful and useful things.

But Kufam Latin really is an attractive and well-made family of fonts, impressive particularly because of how skillfully they integrate features that might easily have become affectations. All the weights are strong and graceful, but I’m drawn especially to the bolder weights, which echo some of the more compelling classical examples of Kufic I’ve seen. Schmal and OurType note that Kufam works surprisingly well for text settings, and it’s hard to disagree with them. Certainly the large character set and full range of typographic features we’d expect from any OurType release — the foundry’s help for the fully-developed release versions is credited to Fred Smeijers and Thomas Thiemich — make the family more useful for that application. But Kufam Latin, like the Arabic, is inspired by public lettering. It references that inspiration openly, on its own and through its Arabic counterpart, and would naturally be suited to architectural and wayfinding applications, where it really would stand out, even in a “visually congested landscape”.

“A new form of physical urban poetry” is probably beyond the ability of any font family to generate on its own. But Kufam definitely does its part, and it’s an attractive, thoughtful, and effective demonstration that Latin and Arabic scripts really can converse on an equal footing. I hope to see it in use in person someday.

Maurice Meilleur is a recovering political theorist turned graphic designer and committed typophile. He currently works and teaches at the University of Illinois at Urbana-Champaign, where he is also a student in the graphic design MFA program. 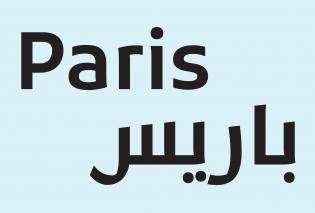 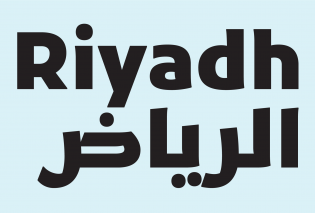