Named for one of the most innovative graphic and information designers of the 20th century, Ladislav embraces the legacy of its namesake without being derivative. By employing a systematic — but not dogmatic — approach, Tomáš Brousil creates a tribute to Ladislav Sutnar that captures Sutnar’s ethos along with the idiosyncratic character of his design work.

Based on Sutnar’s incomplete type designs, Ladislav draws from the letterforms and numerals Sutnar created for Bronx house numbers in the late 1950s and, later, a wayfinding system for a Brooklyn primary school. Ladislav extends the principles of those partial alphabets into a full typeface, without mimicking any specific letterforms.

Sutnar is widely known for inventing the convention of including parentheses around area codes in U.S. phone numbers. Similarly, much of his other work employed systems to simplify complex information and processes. Ladislav follows a similar tack, using a modular system of simple shapes to create its lower­case alphabets and the rounds in uppercase forms. Ladislav eschews the purely geometric model in the uppercase alphabet, however, and favors optical adjustments to hardline pragmatism in general. The result is a simple typeface with the pleasant quirks of truly geometric models that still works as a harmonious and usable whole.

Composed of thirteen styles, including a left-leaning italic and an inline display face, Ladislav is extensive — with alternates, character support, and styles to address myriad design and language needs. However, its more geometric set of stylistic alternates gives Ladislav its true charm. By mixing perfectly round alternates with the regular character set, Ladislav creates the potential for varying and unexpected rhythms that add just the right of amount of asym­metry and unpredictability to the systematically structured typeface. (Pay special attention to the alternate lowercase ‘g’, which is a geometric approach to character design taken to its logical extremes.) It’s this balance between austerity and playfulness, symmetry and asymmetry, pragmatism and irrationality that makes Ladislav so enjoyable.

Ladislav is a wonderful tribute to an under-recognized graphic and information design pioneer. By balancing a systematic approach with subjective notions of balance and harmony, Brousil blends the two into something much more interesting than either on its own. As a result, he captures the spirit of Sutnar’s work, etching out new territory rather than just retreading the familiar. 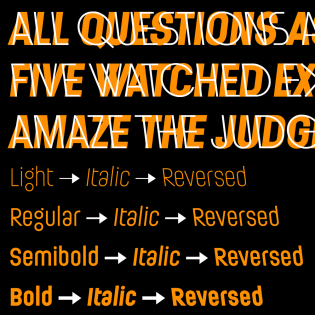