Designer
Jacques Le Bailly
Foundry
Bold Monday
Classification
Display
Featured in
Typefaces of 2012
Elsewhere
Macula in use,
Macula at Fast Company,
Interview at The FontFeed
Get the Fontsi

High-concept type designs are typically quite hard to pull off. Sustaining a pronounced graphic motif throughout an entire character set, punctuation and special characters included, without making it seem crowbarred into the design is no small feat. This is why Jacques Le Bailly’s “impossible typeface” Macula is such an impressive achievement.

Inspired by the Penrose triangle — the optical illusion originally created in the 1930s by Swedish artist Oscar Reutersvärd — this display face turns the viewer’s expectations on their heads. The sturdy sans serif capitals adopt the appearance of three-dimensional typefaces, only to subvert the customary extruded shapes by mixing up the connections between the front and side planes. And it does so in a deliciously unapologetic way, revelling in the confusion it creates.

Drawing on his Dutch heritage, Le Bailly enhances the disorienting effect by adding the typical shading found in the art of iconic Dutch graphic artist M.C. Escher. Furthermore, every single glyph (not just the main characters, but up to the last single floating accent) comes in two variants which are alternated automatically while typing, flipping the point of view from letter to letter. The end result is nothing less than stunning.

The typeface comes in five variants. Some of them can be used independently, while combining Macula Line, Background, and Shading allows users to create mind-bending polychromatic typography. As an extra, the family offers Greek-inspired stylistic alternates for ‘A’, ‘E’, ‘N’, and ‘O’. This is one of the most out-there type designs I have encountered in quite a while, and I applaud Le Bailly for having had the cojones to create such a bold and brash beauty. 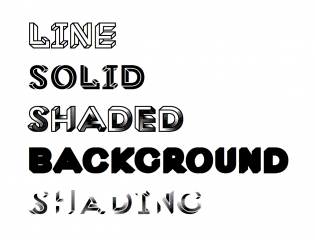 Macula in use for Colin Smith promo by Maurice Redmond

Macula in use for Colin Smith promo by Maurice Redmond