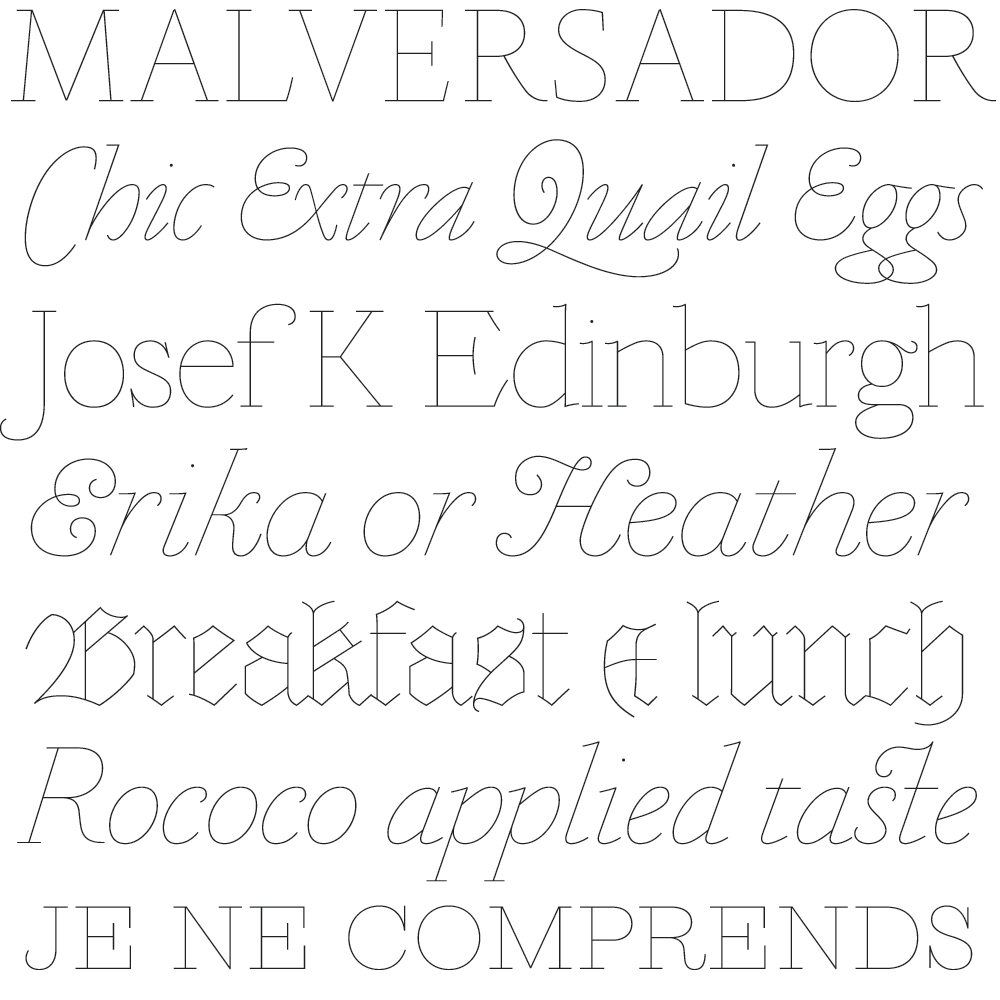 On a cold night in the fall of 2011, I rode the subway downtown to look at a typeface specimen. As I walked south on Elizabeth Street and then turned right onto Kenmare, the specimen came into view through the large windows of a corner storefront. Neon. Nails. Mirrors. I had never seen anything like it.

The typeface in question was Marian, designed by Paul Barnes throughout the aughts, finished in 2011, and released by Commercial Type in 2012. To celebrate the family’s completion, Commercial (in collaboration with artist and industrial designer Dino Sanchez) mounted an exhibition in New York called Thieves Like Us, which is where I found myself that October evening.

Marian has been catchily described as a collection of revivals or cover versions. It’s a highly personal selection, as Barnes readily admits: a subjective “concept album” of the greatest hits of a carefully circumscribed period in typeface design history. And herein lies a fascinating tension: Marian is an abstraction of a golden age of type spanning from the mid-sixteenth through the early nineteenth centuries, when serifed faces used in book typography were ascendant. Yet this process of reduction of a form that is willfully understated — a book face, by design, prefers not to call attention to itself — results in flamboyance. Skeletal, almost a whisper, Marian demands attention and extra care, and needs to be big, even larger than life. (Commercial recommends setting it at 60 pt and above and signals its potential for use beyond print; Thieves Like Us is the realization of that potential.)

The nineteen styles (eight romans, eight italics, and one blackletter thrown in as a “bonus track”) occupy an ambiguous zone between facsimile (cf. Brunel, a strict recreation for contemporary use of a 1796 typeface cut by John Isaac Drury for Caslon) and broad interpretation (of which Chiswick and Dala Floda are examples). What is faithfully adhered to is the genotype of each chosen face. All stroke contrast has been stripped away, leaving a monoline endoskeleton.

Interestingly, although the absence of any modulation implies the removal of any traces left by the tools used to create the source typefaces, the serifs — which might be considered relics of their means of production — have been spared, considered integral to the forms: “While the method of production of a serif has disappeared,” writes Barnes in the exhibition broadsheet, “the serif remains as part of the letter”.

In many type designs, stroke contrast makes the face; modulation yields character. And yet Marian is a character in her own right, instantly recognizable as herself. She could never be mistaken for anyone else. The decision to follow structure to the letter has led, through its very constraint, to a contemporary family of striking originality.

Will Marian be used, though? In an interview with Barnes and foundry partner Christian Schwartz, Simon Esterson hazarded that the new typeface was “going to be everywhere”. So far, with an exception here or there, that has not proven to be the case, which is a shame. And that reveals perhaps another tension. Marian is in some ways a highly impractical typeface — a labor of love and research, designed over the span of many years, introduced to the world through what was probably an expensive installation — published by a studio that wants itself, as its name suggests, resolutely commercial. Barnes and Schwartz have cheerfully noted the irony in interviews. Typefaces, after all, are meant to work. As Schwartz points out in the conversation with Esterson: “[W]hen we’re done with our work that’s not the end of it, it’s a beginning.”

But should that be the sole criterion when advocating for a design or underscoring its importance, or when deciding whether or not a given typeface works? This is where I think it becomes crucial to remember that Marian also functions as pedagogy: a design driven by, Barnes states at the end of the Ypsilon monograph, “a desire to spread knowledge”.

The specimen emphasizes this, too. Marian is a history lesson, a survey course that starts with the beginnings of book typography and continues up to the moment when type was freed from books — when it broke out into posters, broadsides, advertisements; when it became fat, showy, slabby; when it started to shed its serifs. As a contemporary offering, Marian comes at an equally pivotal time. Text has become orbital. It no longer needs to be baked into things. Marian, a display face about the history of book faces, arrives at the very moment of the book’s unbinding and of type’s liberation, closing out a long era of stasis.

As I prepared to leave Thieves Like Us that October night, two guys in their thirties blustered through the door. They stood there looking flummoxed, eyes wide. I wondered what had drawn them into the space. Finally one of them turned to me. “What is this?” he asked.

We talked some more. They were traders, he told me, looking a little sheepish. They worked on Wall Street. “We don’t know anything about type,” he said.

“You know more than you think,” I suggested. He seemed nonplussed and asked me what I meant. “You stare at type all day long,” I said matter-of-factly. The two of them looked at me, then at each other. “Huh. It’s true,” said the other guy. Suddenly, they were interested. Commercial alum Berton Hasebe was on hand to give the two traders a detailed tour of the face and its development. I slipped back out into the night, leaving Marian to do her work. 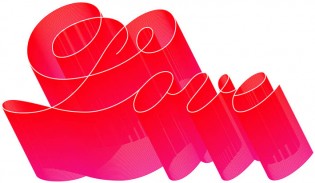 “Love” by Paul Barnes, 2003. Marian began as a monoline copperplate script in Illustrator. 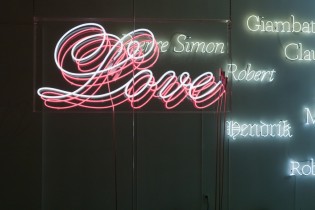 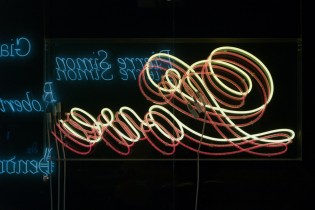 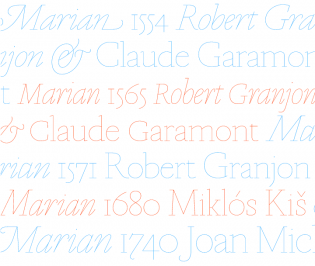 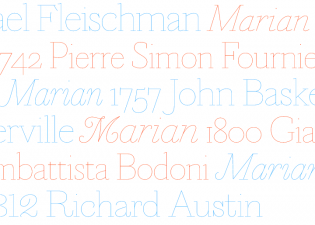 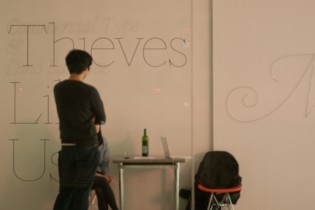 Berton Hasebe at the Thieves Like Us exhibition, New York, 2011.
Photo by Caren Litherland. 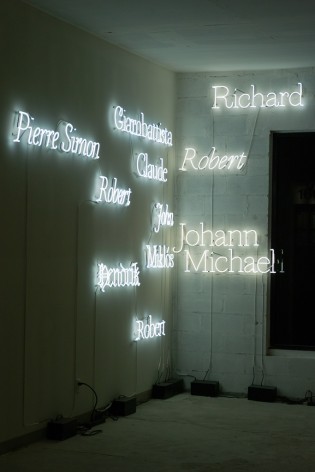