Marr Sans embodies a process that I find most significant in typeface design. It might be called referism: the smart use of references and history in contemporary design.

Far from being a bland revival (a slavish digitization of patrimonial marks), Marr Sans reveals a deep thinking behind the shapes and is a successful example of the “modern history” principle, where knowledge of the past fuels a current practice. The original samples used were scarce and limited — “From a few lines in three sizes, and only one weight” — thus leading me to think that Paul Barnes and Dave Foster had to make a lot of painstaking choices when developing this core design into a full-fledged fourteen-member family: digging for small, lesser-known works, researching across documentation to build an informal visual library, and finally reviving the work of James Marr & Co. in Edinburgh, successors to Alexander Wilson & Sons.

In typeface design, “liberated” is often a poor argument for self-centered expression, thoughtlessly misused to a point where the letters themselves are impractical. Barnes & Foster did not go this route, and instead crafted very discreet yet mischievous features, like the witty punctuation. All the adorable quirkiness of early sans serifs is found in Marr Sans, and the family revives this specific period of history with flair, from the seemingly unbalanced ‘S’ that still strives to depart from its serifed origins to the lowercase ‘g’ with hints of to Baskervillian and Wilsonian flavors. The lowercase ‘t’, with its typical nineteenth-century long ascender, and the lowercase numerals and the ampersand recall a charm that could have been purely vintage, but is in fact completely suited for modern use. Cherry on top: I like the subtle touch of fake-but-not-quite italics, where the corrected sloped romans are joined by an otherwise unexpected single-story ‘a’ and ‘g’. Marr Sans is a triumphant response to the challenge of designing a consistent system with myriad eccentricities. In that way it is a fresh breeze that contrasts with other sleek superfamilies. 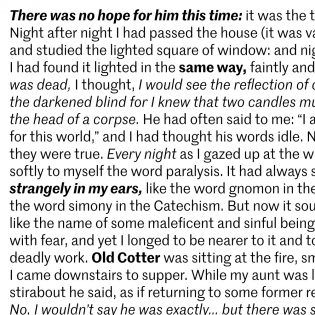