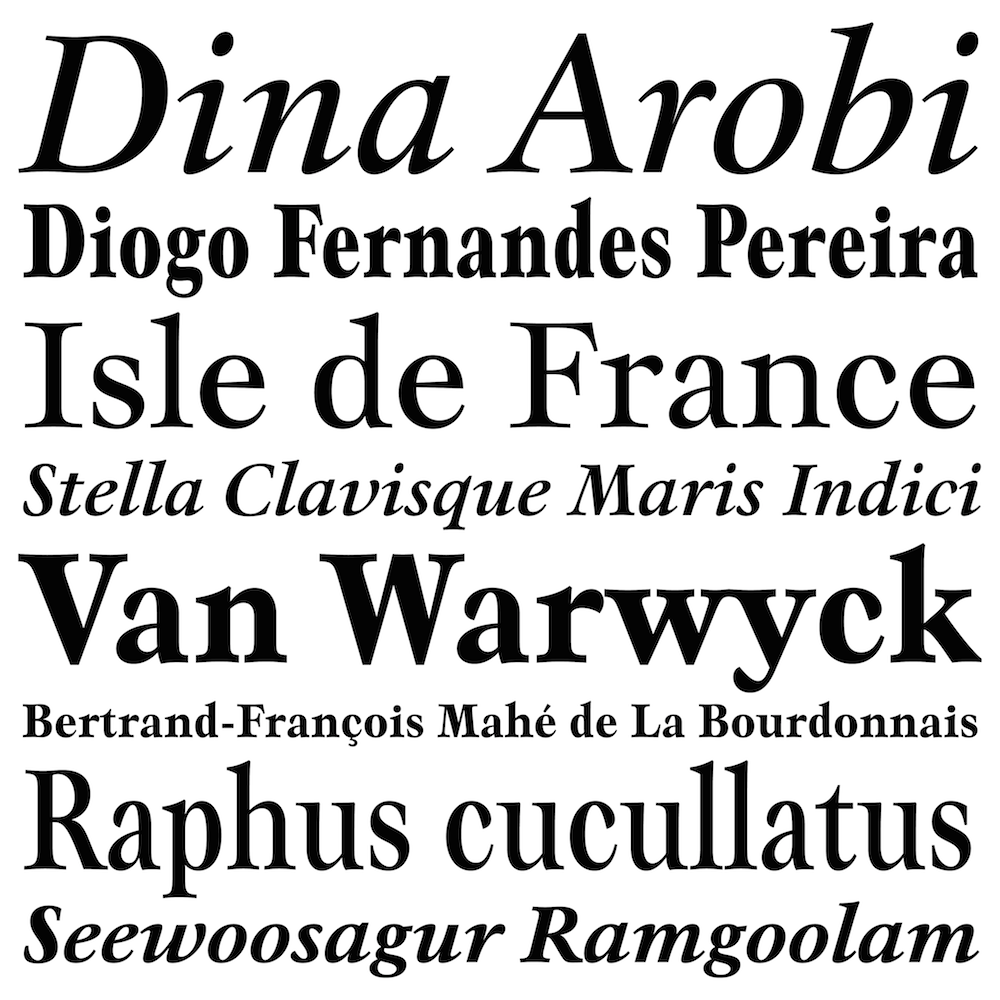 It was just a matter of time until someone did it. Mauritius was the last typeface designed by German lettering artist Georg Trump. First shown in 1967 as trials for a “Barock-Antiqua” (Transitional serif) by the Stuttgart Weber foundry, it remained largely unrecognized. Trump, then in his 70s, completed his oeuvre with the design, as though ticking off the third grand genre of text faces after his rational Schadow and Trump Mediaeval. Last year, Canada Type released a revival, ticking off the last remain­ing Trump face not yet digitally available.

I know the typeface intimately, but have never used it. Ever since I haphazardly bought a random folder with type ephemera in a used book store in my first year in college, 1994, I was attracted to, or rather dragged into, Trump’s work. This folder turned out to contain specimens and ephemera of all of Trump’s typefaces for Weber, including proofs of an unfinished design: “Proben einer neuen Barock-Antiqua”. I marveled at this typeface for years and, in 2010, started to digitize it with Dan Reynolds. We didn’t get far. Distracted by life and train rides, I managed to do half of the roman and Reynolds half the italic. In an April 2010 email to Stephen Coles, I asked if he had ever seen this type­face, enclosing the images at left. His reply: “Wow. That’s pretty spikey [sic], in a nice way.”

Yes, spiky is probably the first thing that comes to mind when seeing this design, and it might, at the same time, be its main obstacle. Reynolds and I followed the original very closely, and although we hadn’t even gotten to the process of refinement yet, I could already tell that it would be difficult to get the individual characters to play together harmoniously. As original, striking, and unique as Mauritius may look in these proofs, it wasn’t a finished typeface yet. Weber seems to have rushed production and cut trials in a few sizes only: the roman in 10, 16, 24, and 36 point, the italic and bold is only shown as an alphabet in 24 point, not used in text (for good reason probably). With 1967 already late in the metal type era and business not going well, they hastily printed a pre-announcement and included the typeface — still unbaptized — in the Trump retrospective Vita Activa, published in December of that same year. Mauritius was apparently brought to market in a limited range of sizes in 1968, but it was the last type­face Weber would ever produce. The foundry closed in 1970.

One could say that Canada Type’s revival is not very true to the original in all its details, but I guess that was necessary to turn it into a functional, usable typeface. I think they did a great job and, in general, preserved the unique character and design intent­ion. (Griffin wrote about his research and design process in this extensive specimen.) While Weber only produced foundry type for hand comp­osition, Mauritius was obviously prepared to be ported to the Linotype or similar system where duplexing of the roman and italic or bold would be necessary. All three original styles were drawn to the same character width, resulting in a rather wide, loose italic with the typical hooky, non-kerning ‘f’. The italic in general seems to have been the least refined in the original, with rather uneven spacing, (too) light a color, and a very narrow ‘S’. Griffin did not iron out all peculiarities and typical Trump-isms. He maintained the general proportions and forms of the italic, and, where he deviated further, kept the form closer to the original as an alternate character — e.g. ‘a’, ‘d’ and ‘u’ — apart from the “mid-century German” italic ‘h’ we all know from Sabon (and misread as a ‘b’).

Griffin’s Mauritius became a distinct, modern text family of dark, lively color — still spiky, and sometimes a tad bumpily spaced, but grown up. Only the roman ‘f’ and some italic forms hint at its age; otherwise, you might mistake it for a contemporary. Mauritius needs a fair amount of line spacing, more than Canada Type applied in their specimen, where it appears quite dense and sometimes flickering (the 9/11 pt showing seems the most balanced to me). And although I mourn the loss of some details (one of the greatest ß’s of all time!), I acknowledge that a collection of beau­ti­ful letters is not what makes a good, usable typeface. 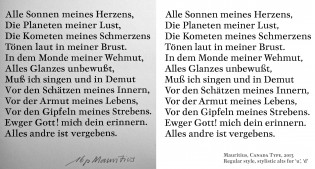 The original Mauritius in 10pt (photo: Indra Kupferschmid). The Medium weight of Canada Type Mauritius is most similar to this size of the metal original, but the contrast is higher, serifs lighter.