If you’ve ever tried your hand at designing a Devanagari typeface or studied one closely, you will appreciate that part of the challenge is to fit complex forms in limited space — a challenge that is amplified when you’re dealing with heavy weights. Far from shying away from it, Modak Devanagari makes this challenge its very bread and butter. Sarang Kulkarni and Maithili Shingre haven’t dabbled in a formal experiment to make a one-off instance of lettering; they’ve pushed their idea far enough to create a complete working system.

Modak Devanagari is as far as it can be from a text typeface. But this over-the-top display design is a breath of fresh air and a new kind of arrow in the quiver of any designer with a limited number of Devanagari typefaces. It is chubby and adorable; hell, I’ll go as far as to call it cute. The incisions in the design are more like marks made in the sand with one’s fingers rather than cuts made with a sharp pair of scissors. Still, they add liveliness and movement to this very heavy typeface. And by cleverly overlaying the part of a glyph that is most essential to its recog­nizability over others, Modak Devanagari makes the most of what little space it has to play within.

Of course, the typeface couldn’t be more aptly named. Modak, a traditional Indian sweet filled with coconut and jaggery, and the elephant-headed, pot-bellied Hindu god Ganesh (who is said to have considered Modak his favorite food) are just the things you want to associate with a typeface that isn’t just fat, but unabashedly portly.

Pooja Saxena is typeface and graphic designer interested in multi-script design. After completing a stint with the font team at Apple, Inc. in late 2012, she moved back to Bangalore, India and now divides her time between typeface design and consulting, and digital design. 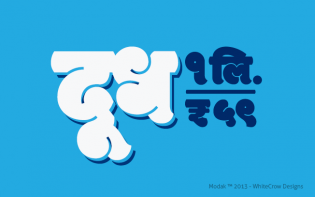