While strolling through various cities on my travels, the design of manhole covers often captures my attention. In most cases, it’s the illustration on them that attracts me.

House Industries’ Ken Barber, who is always on the lookout for lettering sources, also happens to have a passion for manhole covers, and it was was one of these heavy iron discs that led to his typeface Municipal Cast. This explains the strength and sturdiness of the design. But it’s the contrast of black and white, stroke and counter, straight and curved strokes that interests me most in this typeface.

The small but distinctive counters compelled me to zoom into the lettershapes.

Type families are ever expanding toward a vast number of weights and styles. Sometimes this can be a liability more than a benefit, and the work of those who deploy a typeface’s full range can look random and unfocused. By contrast, Municipal Cast comes in just one weight. The graphic designer who chooses this typeface for a project can’t cheat by showing off with complicated, multistyle hierarchies: Municipal Cast makes a clear statement with a single, mighty thud.

Mariko Takagi is a German-Japanese researcher, typographer, author and designer of books and associate professor based in Kyoto, Japan. 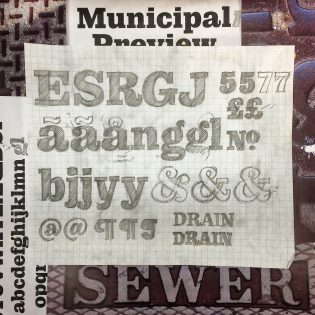