Neacademia is a book serif that draws inspiration from the types that Francesco Griffo cut for Aldus Manutius in the 15th century. Do we need yet another Aldine revival? If it is as spirited and well-executed as this one – oh yes, please!

Sergei Egorov’s debut release is very vivid – with its bright-eyed ‘e’ that briskly stretches out to the right, the debonaire ‘d’ that overshoots the baseline, or the valiant ‘a’ with its strongly modulated, lightly leaning stroke. In fact, all lowercase stems are off the vertical, the words gently tilt forward. Neacademia is less regularized and stiff than most related designs. It exhibits the typically long extenders and is pretty large on the body. Particularly striking, however, is its relatively short cap height. The serifs are pronounced and asymmetrical. On the page, Neacademia creates an even and not too light color – only the long-tailed ‘Q’ proudly stands out. The Italic slopes just a little, its caps even less. Still, the companion style sets itself apart by its distinct forms.

The fonts do with minimal kerning – the Roman lowercase actually needs no kerns at all. Instead, the balanced spacing is achieved with the help of contextual alternates. If the ‘g’ precedes another descending glyph, its loop swings a smidgen to the left to make room. In the same vein, the ‘f’ pulls back its arm when followed by an umlaut. As fascinating as it is to watch this built-in intelligence in action, there is room for improvement: similar pairs that would equally benefit from a substitution were not always considered. Apart from the alternates that prevent collisions, there are also some that seem motivated by a desire to reduce monotony. In doubles like ‘ll’, ‘tt’, or ‘zz’, the first character takes on a slightly different form. Likewise, a sequence of repetitive forms, such as in “accommodate”, gets its rhythm through the insertion of alternates.

Coming from Rosetta, a foundry established in 2011 that specializes in multi-script fonts, it is no surprise that Neacademia’s language support goes beyond the usual. Although I don’t feel qualified to judge the Cyrillic, it goes well with the Latin and was drawn by a Moscow-born native. There is no bold, but that is just fine for a classic book face. More important are optical sizes, and, fortunately, those are already in the making. Adding small caps and a full set of superior figures would render the family even more usable. If you still ask yourself whether this might be a good addition to your library, typeset the question in Neacademia – you will love that question mark! 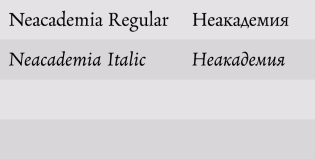