I’ve long been interested in the possibilities of modular design: a system (an alphabet, say, or a set of icons or symbols) from a limited number of smaller units, or modules — units that can then be combined in several ways to create larger shapes. (For a good example of such a system, see FontStruct.) Creating an image or a typeface from dots could be seen as an extreme form of modular design. There is only one unit, the dot, repeated along the rows and columns of a grid.

A2-TYPE’s New Airport Dot is such a typeface. It’s a revival of Dotmatrix, designed by Margaret Calvert in or around 1970. (If her name doesn’t ring a bell, you may have seen the seminal work she did with Richard “Jock” Kinneir in the late 1950s and early 1960s — designing a cohesive, coordinated signage system for Great Britain’s highways and roads that is still in use today.) Calvert’s Dotmatrix was created for the British Airports Authority, specifically for illuminated concession signs rather than for an airport’s main signage, and it was only available as lowercase letters and a single weight. Scott Williams and Henrik Kubel’s revival not only adds capital letters and numerals to complete the character set; it also expands the original single weight to five. The strokes of the original Dotmatrix were three dots wide; New Airport Dot adds two lighter weights, with strokes of one and two dots wide, and two bolder weights, with strokes that are four and five dots wide.

This is a very functional typeface, of course, but the new slimmer weights look distinctive, and the large x-height (part of Calvert’s original design) allows even the boldest weight to remain legible. New Airport Dot is an unassuming but well-designed addition to A2-TYPE’s growing collection. 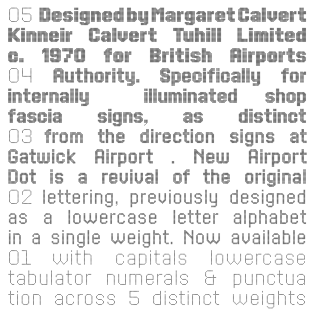 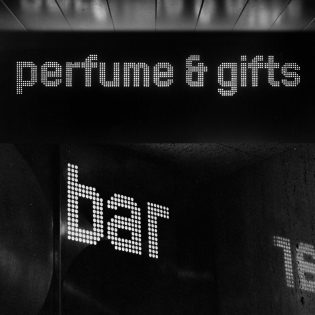