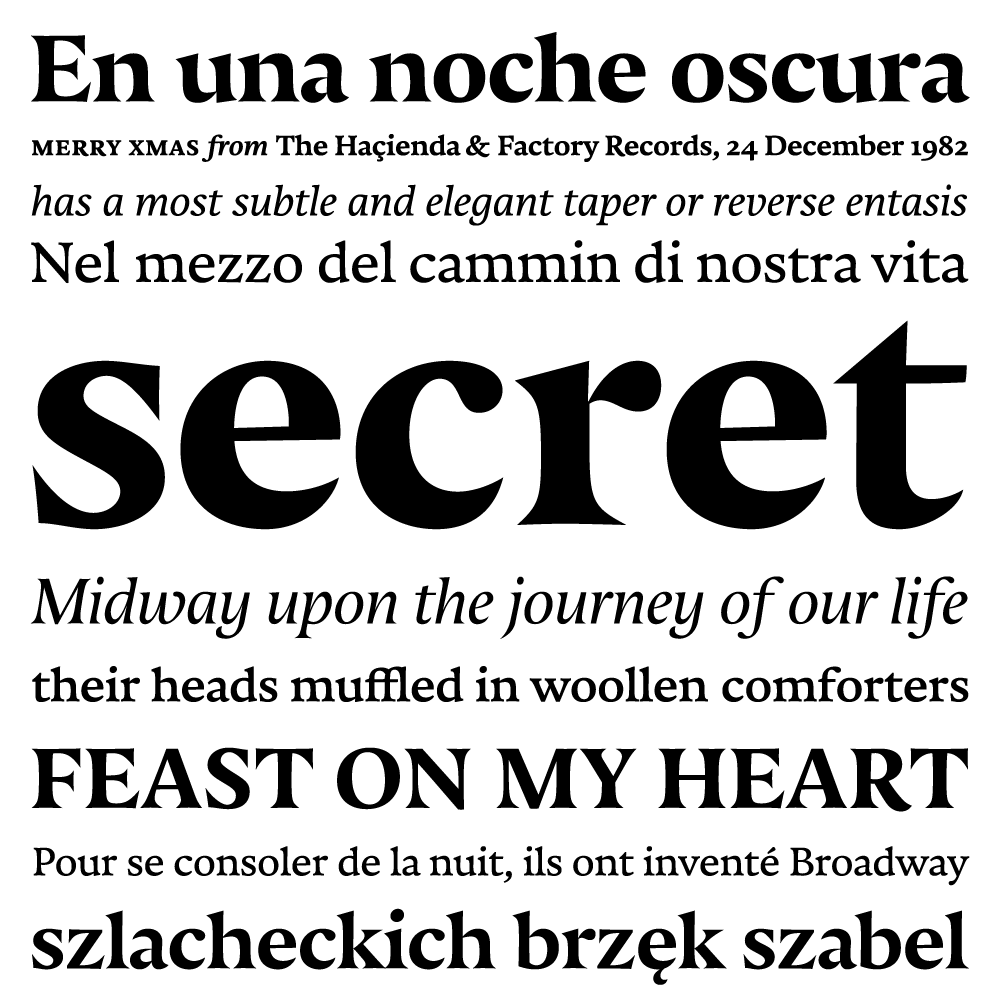 You don’t see him much on Twitter. You won’t find him on the popular design conference circuit (though you may spot him at ATypI). In fact, unless you’re a bit of a type nerd, you may not have even heard of him. No matter. He’s doing just fine. Quietly, without fanfare or braggadocio, from a hilltop studio in a small town near Zagreb, Nikola Djurek has been designing some of the most original typefaces to emerge in recent years.

With Nocturno, Djurek continues the questioning of classification and tradition undertaken with earlier designs like Brioni. The influences of pen and brush shine through here, and Nocturno’s personality is largely Oldstyle. But it also shuttles fluently between early inscriptional forms and subtle modern gestures.

True to its name, Nocturno tends toward darkness. Color accumulates at the mid- and baselines via broad shoulders and substantial sculpted serifs. This massing draws readers’ eyes along and lends Nocturno an overriding sense of horizontality and momentum, an effect reinforced by compact extenders. Quasi-elliptical tittles placed slightly off-center also do their part to pull text rightward. But the horizontality never feels overbearing; relief comes in the form of steeply sloped head serifs, echoed by jaunty outstrokes at the baseline.

In any event, reading is never simply about moving forward. Reading, if one thinks of it as a continual negotiation between recognizing discrete shapes and clustering those shapes into familiar word patterns, is equally about pausing — as much a “vertical” activity, it seems, as a “horizontal” one. Djurek emphasizes the autonomy of individual characters in part through attenuated arches and through what he calls “recurvate inside contours”. The only potential drawback of these gorgeous interior curves is that, combined with the Clydesdale feet of ‘h’, ‘m’, and ‘n’ in the text version, they make for cramped quarters on the insides of forms; the counters of these letters risk appearing closed when rend­ered at extremely small sizes in less than optimal conditions. Even the best typefaces require careful use.

Nocturno is not a lighthearted face; it is a rolling, sober, and sensual one. But for all their heavy roundness, the text styles feel crisp and precise, on paper as on screens, down to fairly small sizes. Medium contrast, generous x-height, slightly oblique stress, subtle curves combin­ed with modest angularity, moderately open apertures — all work together to encourage immersive reading.

The incisive display cuts are more than simply refined versions of their sturdy text counterparts. Nocturno Display is its own thing. It sheds massive, almost clunky concave slabs for pointy shards; the graceful tapering of the stems almost pushes the display version into flare serif territory. And, particularly in the display, the face’s overall heaviness is leavened by finely attenuated joining strokes, providing the sort of contrast often associated with modern types (and, of course, scripts). One can imagine the brighter display cuts working remarkably well for headlines in just about any context. In fact, at the very moment I was writing this, Stephen Coles licensed the webfonts to use for Typographica heds.

Perhaps it is no longer possible to call Djurek a new or up-and-coming designer, but he consistently innovates. That he is scrappy and independent seems undeniable. Shortly after founding Typonine, Djurek told John Boardley that his ambition was to create “a nice foundry (nothing big), where I will publish some of my fonts”. As the eight-year-old company enters maturity with no signs of slowing down, Djurek appears to have achieved his goal. 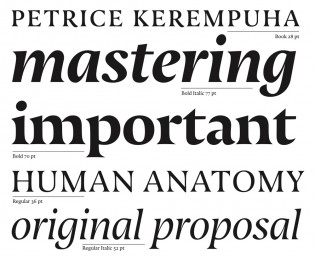 Sturdy serifs in the text version become pointy shards in the display.