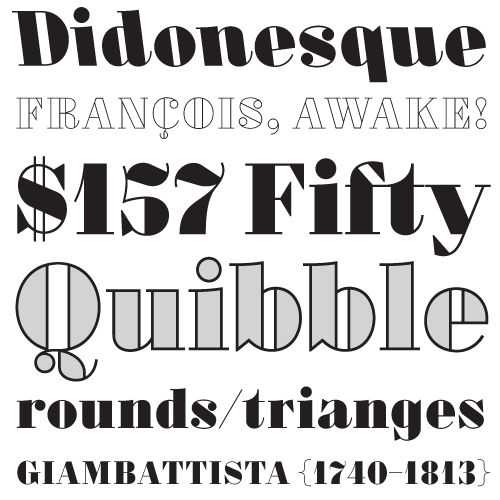 For more than 15 years the typographically irreverent Gareth Hague has had his rascally way with the Didone model.

Oban capitalizes on the geometric tendencies of so-called “Fat Faces” of the 19th century, like Normande and Thorowgood. But where these are gooey and irregular, Oban is crisp and exact, constructed of straight lines and nearly perfect circles. Coincidentally, Jos Buivenga had a similar idea at about the same time with his lovely Geotica, but that face strikes a more dainty, decorative tone.

Along with the standard ball-terminaled edition, Oban comes in a version with triangle tips, giving the face a more sinister smirk. And then there are the italics, which – with typical Hague mischief – lean backward instead of forward. Each of these styles is available in an outline version which can be filled with color using the regular style.

Oban isn’t strictly geometric. Hague avoids the traps that snare those with less experience. But his ambition does strike a sour note here and there. The ampersand is awkward, the word space is too narrow, and Oban Round’s ‘s’ doesn’t work quite as well as the rest. But these are mere quibbles. In fact, just set the word “Quibble” and suddenly all is forgiven and I’m happy to let Hague do what he will with old Moderns. That’s a good thing because he’s at it again in 2012 with Alias Didot.

Stephen Coles is the editor and publisher of Typographica.org, The Mid-Century Modernist, and Chromeography. In 2011 he co-founded Fonts In Use and teamed up with Paul Shaw for a regular column in Print magazine. Stephen works from his girlfriend’s flat in Berlin and his cat’s home in Oakland.