When asked to pick a favorite typeface for 2014, I was both honored and confronted with a difficulty. I like type, but I tend to approach type releases without much enthusiasm: I need to have used a typeface to ascertain if it’s as good as the designer claims. On top of that, I was asked to write about the selection I was going to make but, sadly, the aesthetic qualities of a typeface aren’t really enough to inspire my writing. I needed to find something that left a different kind of impression, a more lasting one, something I could relate to. That’s when I was reminded of Parmigiano.

I must first admit that I was influenced by the name. I may only be half French, but that’s enough for me to approve of anything that refers to cheese. While this contextual detail is true, it is not the imagined pleasurable taste of dry salty cheese in my mouth that made me welcome the release of Parmigiano but, rather, my strong interest in types produced at the turn of the nineteenth century, especially in France and Italy.

I once had the opportunity to gaze upon books printed by Firmin Didot and his sons, and I was astonished to discover pages of text that were quite readable. My education in type at this point had been rather minimal, but one mantra had stuck in my mind: “One does not idly use a Didot face to set continuous text”. And there I was beholding text that I found pleasing to read and that bore an unmistakeable clarity. It seems to me that these qualities have not endured in the later designs inspired by the types of Bodoni or the Didots, because they were focused primarily on display sizes and high contrast. These styles are not just about contrast, though; the real defining element is verticality. It may be true that “vertical” type is less easy to read than classical forms of Garamondian descent, but I’m convinced that the slight difficulty encourages a bit more concentration, which for some reading is a good thing.

Parmigiano is a type family that widely reappraises the utility of “Modern” faces and their actual capabilities in continuous text setting. While there have been precedents of text faces based on the styles of Bodoni, I don’t think it has ever been done in a way that encompassed such a broad spectrum of possible use cases.

Loïc Sander lives and works as a type and graphic designer in Strasbourg, France. 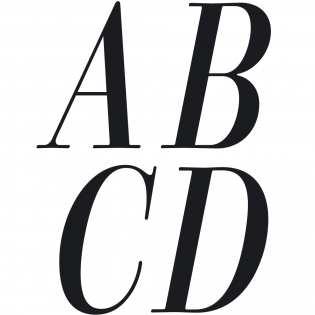