Portada is one of those typefaces that just feels right. There are no obvious “look at me” features, clever design traits, or signature glyphs. Instead, it’s perfectly crafted for its intended purpose: to shine on screen. (Not for the first time has the restrictive environment of newspaper production proved to be a suitable test bed for on-screen typography: Portada has its roots in Clarín Títulos, a custom titling face TypeTogether designed for the Argentine newspaper Clarín.)

With low stroke contrast in the mold of Capita, Guardian, Chaparral, or FF Tisa — but without similarly hefty slabs or a noticeable accent — Portada’s smooth, even color derives from generous proportions, open apertures, and relaxed spacing. Highly readable, even at sizes where serifs can sometimes appear to cause crowding, Portada offers the utility often ascribed to a sans for on-screen use, but with added warmth and rhythm.

Even a cursory glance immediately reveal’s Portada’s suitability for serious, involved applications — those where competing priorities might exist in close proximity, where sizes and weights must be distinct but harmonious, and where data presentation must be unambiguous but unobtrusive. Portada’s full expanse makes such matters more than manageable, with a family of distinct weights (in text and titling variants), a full range of numeral styles, and proper small caps, among other features.

Additionally, the Portada family includes a set of compatible interface icons, available via OpenType features. The intent is commendable, although the practicality of extensive use (especially in anything other than Adobe applications) remains to be seen. At a bare minimum these days, arrows and directional glyphs should be a given in any UI-focused typeface, and Portada includes these as standard.

If there’s any criticism to be made — and it’s a designer nitpick, admittedly, rather than a fundamental failing — it’s that the italic y is simply too fanciful. In its defense, the designers claim an intentional “artefact of calligraphy” to bring some additional energy to the face; this affectation is more pronounced in the titling family (the w is another victim), as might be expected. It also indicates that this “artefact” was an aesthetic choice rather than a legibility booster; in a diacritic-heavy setting (such as Czech or Icelandic), it becomes still more distracting.

Nowadays, we’re awash with typefaces claiming to be suited for on-screen use. They’re easily accessible and often free — and have long since reached ubiquity because of it. As connected devices proliferate, your audience, your user experience, and your brand will benefit from looking beyond these tired sources. Portada is a great starting point. 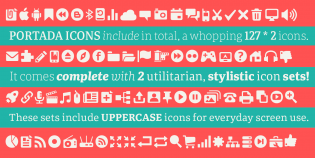