Commercial Type knows how to look at old type with fresh eyes. They may do it better than anyone. Three of the foundry’s recent releases clearly demon­strate this rare ability: Paul Barnes stripped traditional models to their bare bones to make Marian; Christian Schwartz recreated Antique Olive from memory for Duplicate; and Berton Hasebe imagined French Renaissance types from a modern, minimal­ist perspective when he drew Portrait.

It seems outlandish to combine the intricate forms of 500-year-old type with stark minimalism. Yet the output here, while unexpected, is not wild or jarring. Nor is it relegated to the bin of fleeting experimental designs. It is actually useful.

This successful result is only possible in the deft hands of a practiced and original type designer — and Hasebe is certainly that, having already reimagined the rugged text serif and geometric sans categories, as well as assisted on various other projects during his 2008–2013 tenure at Commercial Type.

Hasebe’s primary model for Portrait was a Two-Line Double Pica (32-point) attributed to French punch­cutter Maître Constantin around 1530. This was one of the first display-size Roman typefaces with a lower­case, and a major influence on Antoine Augereau and Claude Garamont, who produced the archetypes for what we have come to know as “Garamond”. But where these Renai­ssance faces are delicately shaped, refined, and complex, Portrait is spare and simplified. Simplified, but not simplistic: there is clearly nuance in this reinterpretation. Hasebe hasn’t merely reduced curve complexity and replaced bracketed serifs with crisp triangles; he has pulled taut the skin of the old type, giving it new life without masking its core character. (John Downer’s Vendetta is one of the few designs to have had this sort of reinvigorating effect on classic Roman type. In that case, it was the Venetian model.)

While the general idea of a Garamond remains in this design, Portrait has a strong personality of its own. Designers will inevitably interpret those sharp, thorny details as wicked or macabre. The typeface has already been employed for a striking paperback edition of The Shining. And that’s fine — there is no doubt Portrait plays that part well. But I’m more interested to see it cast in less expected roles.

Fortunately, there are plenty of reasons we can expect to see more of Portrait in the coming months:

Stephen Coles is editor of Typographica, Fonts In Use, and The Mid-Century Modernist, and author of the book The Anatomy of Type. He works from his girlfriend’s flat in Berlin and his cat’s home in Oakland. 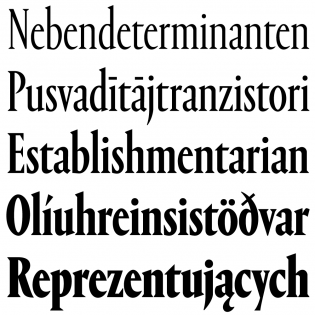 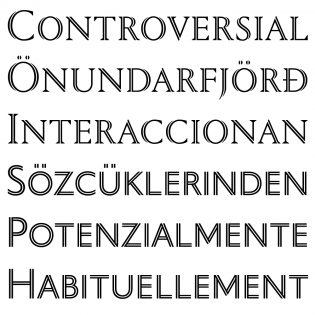