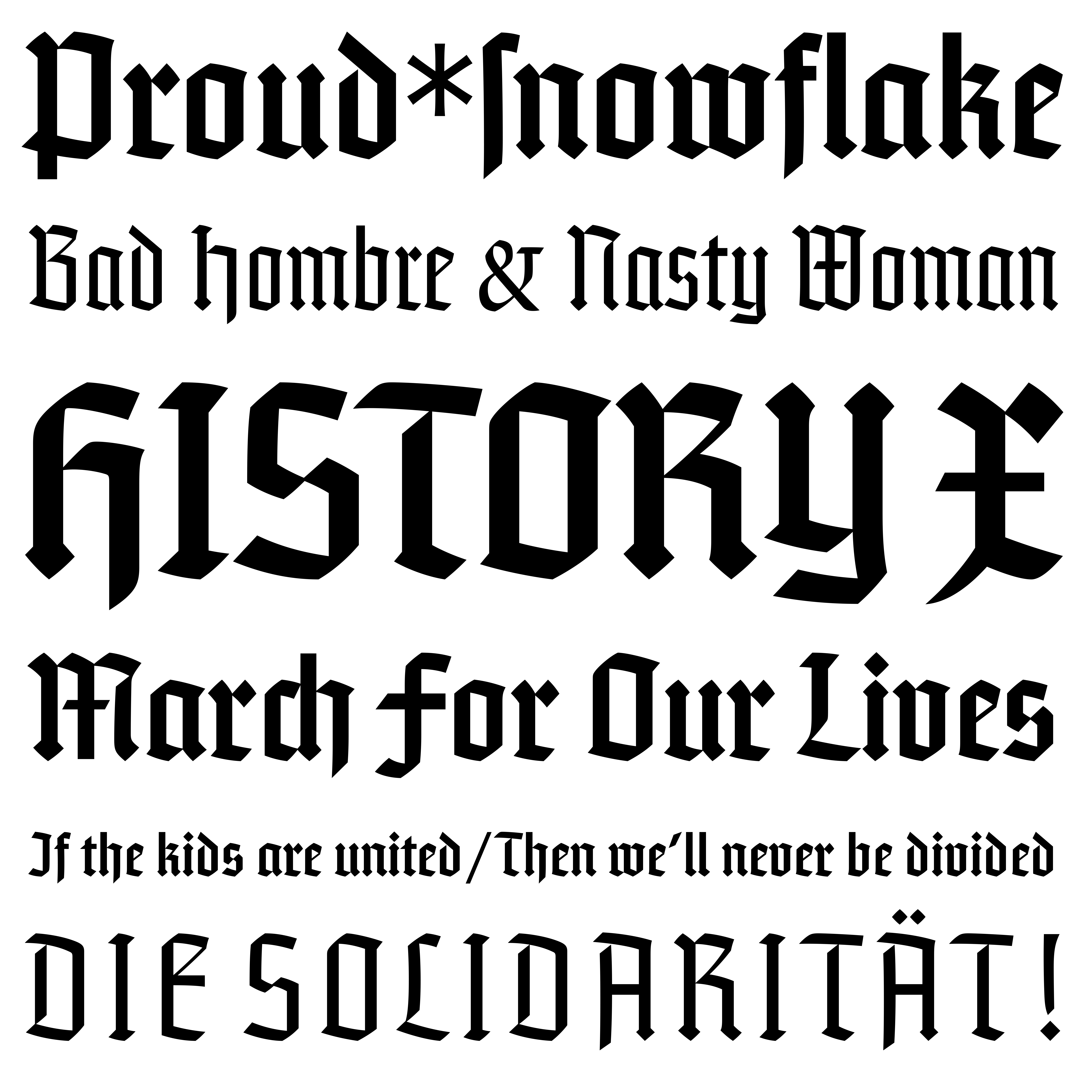 As 21st-century America hurtles towards fascism, when the current reality has become so absurd as to render parody obsolete, using a Schaftstiefelgrotesk1 may feel uncomfortably close to the real thing. So when you need a strong, imposing blackletter, but want to avoid the Third Reich undertones of a Jackboot Grot like National or Deutschland, reach for Omagari’s revival of Sachsenwald instead.

Sachsenwald has an interesting backstory. As the Nazi party rose to power in the 1930s, designer Berthold Wolpe was denied the right to practice his profession in Germany due to his Jewish heritage.2 Fortunately, Stanley Morison of Monotype helped Wolpe emigrate to England before the shit really hit the fan.

Monotype had been working with a German publisher, Ullstein Verlag, to develop a modernized Textura. Unfortunately, Ullstein, owned by a Jewish family, was forced to sell the business at a loss to the propaganda arm of the Nazi Party before the type was finished. Wolpe continued with the drawings for this typeface at Monotype’s behest.3

The first draft was titled “Bismarck-Schrift,” appealing to the growing German nationalism of the day. When Monotype began to consider advertising this typeface in England as well, they renamed it the slightly less aggressively nationalistic “Sachsenwald,” and revised some of the letterforms to be more appropriate for a wider audience.4 However, when the war broke out, despite having emigrated as a Jewish refugee fleeing Nazi persecution, Wolpe was shipped off to an internment camp… in Australia. And his typeface Sachsenwald was shelved indefinitely, rendered unsellable by the war. In fact, it was nearly retired forever by Monotype, until Toshi Omagari came along in 2017.5

Sachsenwald seems deceptively simple due to its lack of traditional embellishments. It has been classified as a “modernized blackletter,” stripped of the ornamentation, flourishes, forked ascenders, hackles, hairlines, blood drops, etc. that one might find on a high Gothic Textura or a calligraphic Fraktur. This was intentional — in Monotype’s original marketing campaign for the typeface, they specified that these were letters “without the fussiness” of many blackletter faces.6

Although it may appear simple, try to imagine retro-engineering a calligraphic script out of Sachsenwald. The challenges become apparent. The pen angle changes constantly between strokes, and there is considerable manipulation involved. It has some flattened feet and terminals. There is also a subtle curve to some strokes, especially noticeable in the boxy, romanized capitals. (NB: This blackletter typeface looks great in all caps. Perfect for that LA gangster stomach tattoo.)

Wolpe felt that “The traditional should not be merely replicated, but adapted to modern needs and techniques,” which is exactly what Toshi Omagari has done.7 He added the characters necessary to modern life, such as the at sign, dollar sign, and hashtag. And he extended the modifications that Wolpe initiated to make this blackletter more legible to non-Goths (Wolpe had engineered somewhat romanized alternates to H, I, and L, since the original versions of these letters were more challenging to British readers). Omagari also included a diagonal-stem x that is more recognizable to our 21st-century eyes.

Omagari standardized certain details in other letterforms, such as evening up all the crossbars, and adjusting the foot of the r to match the baseline strokes of letters such as the a and u. And he increased some of the subtle curves that helped give Wolpe’s type a softer, more human look than the Schaftstiefelgrotesks which took this stripped-down style to its stark, militaristic extreme.

My criticisms of the revival are few. The original casting is a touch beefier, with smaller counters, which I prefer. And the S is too wide (a carryover from Wolpe’s version). It lets in far too much light for this Goth. Finally, although I understand Omagari’s aesthetic rationale when he changed Wolpe’s zero from its ovalized form to a boxier shape, I didn’t actually think the original zero was so out of place, and the redesign, however attractive, brings with it the usual issue of differentiating the zero from the capital O.8

Overall, however, I am thrilled to have this beautiful revival in my arsenal, and so grateful that this robust typeface was brought into the digital realm, like Lazarus back from the dead. And on the political front, if we keep up the pressure, our Twitter demagogue and his coterie of pseudo-populist criminals will get their asses impeached before they can polish up those old Jackboots and make Amerika verboten again.

But until that happy moment, I will reach for my Sachsenwald.

Full disclosure: I studied Blackletter calligraphy for years under the strict tutelage of the inimitable Ward Dunham, a hefty ex Special Forces Marine with a penchant for sharp knives and the occasional healthy splash of homemade Slivovitz in his morning coffee. Everything about Dunham is big, bold, and loud. He drummed into us that blackletter, specifically Textura, was a raging battle being fought between black and white on the page. Dunham, fist pounding on his writing desk for emphasis, railed: “We must never allow the white to win, goddamnit.”

Having had this incessant tattoo hammered into my skull, I am recusing myself from any attempt to objectively evaluate Sachsenwald Light. However skillfully it may have been executed, however true to the original, all that white space makes my horror vacui twitch. So, my apologies for the omission, but I would be a poor judge.

Grendl Löfkvist, Education Director at Letterform Archive, teaches type history and theory in the Archive's Type West program. She also teaches graphic design history at City College of San Francisco, as well as calligraphy at the San Francisco Center for the Book. Grendl has ink in her veins: she was an offset press operator for twenty years, and she serves on the board of directors for the American Printing History Association and for its Northern California chapter. Her interests include the study of printing as a subversive “Black Art” and she’s always on the lookout for bizarre or macabre print, type, and lettering lore (she is a bit of a goth). 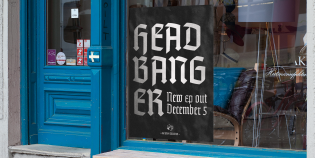