A lot has already been written about San Francisco, including the fact that its name is not always San Francisco. So I’ll try to bring to light a few things I think are inter­esting about the font family, while not break­ing my pledge as a developer to use it “strictly for evaluation of its quality and func­tionality as an OS font for use by the applications and other software I am developing”.

OS fonts are the font family, or families, an operating system uses on screen for buttons, bubble captions, file listings, short and long texts, and all the scripts the OS supports. These fonts are usually employed by the applications the OS maker develops, as well as by most of the applications developed for any given platform. So, short of going into an authoring or graphic design application that offers a variety of fonts, the user of any OS is bathed in the OS font family on the desktop and mobile devices.

Starting out in the 1980s as bitmapped fonts for Xerox, IBM, Apple, and Microsoft, OS and application fonts and, up until recently, operating-system font families, were all sans serif — no apparent contrast between vertical and horizontal strokes, no significant emph­asis on the terminals, and consisting of a single master each of sans, italic, bold, and usually bold italic. Aside from the single master, these rather plain design characteristics suited the needs of low resolution, the task of international font design, and were right for efficient storage and processing of fonts.

None of this got any simpler when outlines replaced bitmaps for the desktop OS and their associated applications, or when the desktop became the web, or when the web brought all the scripts in the world into very close contact with billions of users. It has become harder to change the plain regular sans monoweight “look and feel” users had been bathing in. So, what I like about San Francisco is that Apple changed first to a lighter face than the other OS, with their adoption of the three lighter weights of Helvetica, and then to a squarer face than the other OS fonts as part of the introduction of multiple-size masters for the new OS.

This has been a somewhat brave multistage process that has welded together their old and new desktops, with the exception of Lucida, as the smaller sizes of San Francisco and Helvetica become similar, while the larger designs of San Francisco take on their own distinct squarer and more modern appearance. All of this happens without disturbing the OS visual relations with the non-Latin scripts already supported. Many of the latter, Chinese, Korean, and Japanese font dev­elop­ers, including Apple, as time has passed, have created fonts with interpolatable weight axes that now allow lighter fonts and size mastering to achieve better control over type color, across scripts.

Most digital publishing relies on large color contrasts to bring attention to type across various media. Though 95% of content of the web, it is said, is typography, type sometimes needs to grab eyeballs when it is large and among competing media like photos, video, and site navigation. But it also needs to massage the eyeballs just right when the type is small, providing no distraction or crowding for longer reads. That’s not what Apple is publishing, though. Up above all that digital media and everyone else’s fonts is the OS font family, and the quieter that gets, the easier it is to design with, among, and around, where required.

David Berlow entered the type industry in 1978 as a letter designer for the respected Mergenthaler, Linotype, Stempel, and Haas typefoundries. He joined the newly formed digital type supplier, Bitstream, Inc. in 1982. After Berlow left Bitstream in 1989, he founded The Font Bureau, Inc. with Roger Black. In 2007, Berlow was a recipient of the SOTA Typography Award. 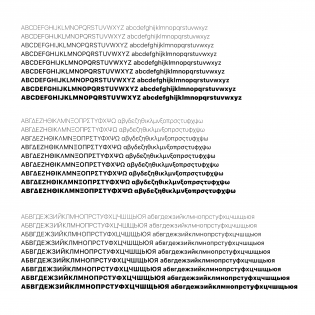