I recently made an amazing discovery: the portfolio of Natalia Vasilyeva, whose latest typeface release, Scientia (PDF), calls for scientific work in more ways than one.*

She may not be widely known in the West, but Vasilyeva is an accomplished Russian type designer, book designer, and calligrapher hailing from Barnaul, a big city in Western Siberia, near the borders of Kazakhstan, Mongolia, and China. On Paratype’s website, her profile shows a serious lady with a slightly 1970s look — and an impressive list of typefaces: Adonis, Adventure, Hortensia, Sans Rounded Vesna, Margarita, Natali Script, Nat Vignette, Paneta, and Prospect, plus Cyrillic versions of Bitstream Zapf Elliptical 711, Bitstream Mister Earl Motiv, and more.

Vasilyeva’s latest release gets its name from the Latin word for science, research, knowledge, and know-how. The four-weight (plus italics) typeface supports Latin, Cyrillic, and Greek, and includes a set of arrows and mathematical symbols.

Scientia was developed chiefly for the astronomy books Vasilyeva designs. As its name suggests, this font family makes an excellent choice for all kinds of academic publications. But I see it working well for fiction, too. To my eye, the family is characterized by a noble reticence. Not shyness, but a sense of its own supportive role, as a means of “transport” for text, possibly for very complex text. Scientia appears to be classical in a familiar way, combining serious looks with a delicate freshness.

Maybe this freshness derives not only from Scientia’s forms, but also from excellent craftswomanship. Scientia is obviously made to work: whether in print, on screen, in very small sizes, and for large swaths of texts. It is simply well done. There is no trace of vanity or ornamental emotionalism or anything like self-praise to be found in this elegant work.

I would really like some researcher to write more about the many type designers who are often unknown outside their own countries — such as Russia — yet who contribute substantially to Latin and other language systems. Please find Scientia among Natalia Vasilyeva’s thirty-seven font families, and let us not overlook experts like her, who contribute superb work, supporting us with their craft and creativity from places outside the usual spotlight.

* Thanks to Luc(as) de Groot for bringing Natalia Vasilyeva to my attention. 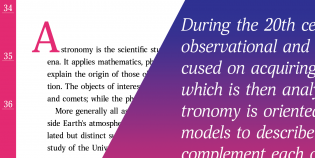