Designer
Maurice Göldner
Foundry
OurType,
Type By
Classification
Slab Serif
Featured in
Typefaces of 2012
Elsewhere
Stan in use
Get the Fontsi

Some typefaces are so nice, you don’t know what to say. They are neatly drawn, have plenty of neatly interpolated weights, are awesomely legible in small sizes while (ha) interesting in large … and then I turn around and can’t describe the typeface. There was nothing eccentric that caught my eye, nothing notable that helps me remember it when Australia asks for a font ID.

Not so with Stan. Stan is the typeface with the waving-flag ‘g’ (Winkelement). It’s the one with the hooky ‘f’ and ‘j’; the characteristic vertical terminals in ‘a’, ‘c’, ‘r’, and ‘s’; the chamfered ‘t’; and the wide italic where the slab loses half of its square serifs and speeds away. (I’m writing this out of memory on a Flash-less device, so may have forgotten some details.) But besides these endearing peculiarities, it is Stan’s winding history that intrigues me. To be fair, Maurice Göldner, the designer of Stan, is not responsible for all the weird features. He based his series on the peculiar Wellington, a very little known typeface issued in 1913 by the Dresden foundry Schriftguß AG Brüder Butter, who was noted for its daring designs aimed at the emerging Reklame (advertising) market. (Wellington in turn has its roots at the Inland Type Foundry Saint Louis, merged into ATF in 1911. See below.)

Unlike its model, which was only available in a regular and black style, Stan comes as a full-fledged family in seven weights plus italics, small caps, ligatures, six sets of numerals, symbols and extended language support. An interesting complement to all this is Stan Plus, the same set of styles but with longer extenders, which give text a bit more air to breathe.

Although I mocked that beaten claim earlier, Stan is indeed this: a typeface that fulfills the popular promise of being very suitable for body copy, if you seek a little more edgy flavor than your standard serif, and memorably wonderful in large sizes.

Indisputable best glyph: ‘fj’ ligature. Outlook for the 2013 Typographicas: Visit Maurice’s website to get a glimpse of the upcoming Stan Sans (used as webfont for body copy), or of the bold style in this teaser poster.

Foster, a heavy, in today’s spoilt eyes clumsy square seriffed slab, was issued in 1905 by the Inland Type Foundry of Saint Louis, Missouri, and presumably designed by William Schraubstaedter, one of the founders of Inland. It was available in one weight only but had a unique companion: Webb, an outline slab that looks even more cumbersome at first. It was designed to be used together with Foster, printed in a second color. You can see some samples of the combination in the 1912 ATF catalog. Interestingly, the outline and color contrast manage to even out a lot of the wonkiness of the individuals.

Foster was the model for Wellington’s black weight. By adding a lighter style, thinning the heavy serifs and mitigating some of the eccentricities, the Butters translated it into a more versatile typeface. This was not the first or only deal between Dresden and the US. Schriftguß AG had good commercial relations with ATF. For example, they issued Goudy’s typeface Papst Old Style as Ohio in Germany (used for the Bauhaus manifest in 1919).

Göldner deliberately placed Foster/Wellington Black outside the scope of his revival. He concentrated on Wellington’s regular weight (Gewöhnliche Wellington) which, unlike the Black, features the characteristic stroke contrast he preserved in Stan. Starting from there, he drew the rest of the family from scratch, winding up with a black weight that looks quite different to Foster and Wellington Black. Nevertheless, you can clearly see that some of the distinctive traits of the later descendants — like the ‘g’ (here with open loop), the ‘t’, the ‘f’, or tail of the ‘Q’ — were already introduced by the heavy Missourian slab from 1905.

Thanks to Maurice Göldner for the Wellington specimen images. 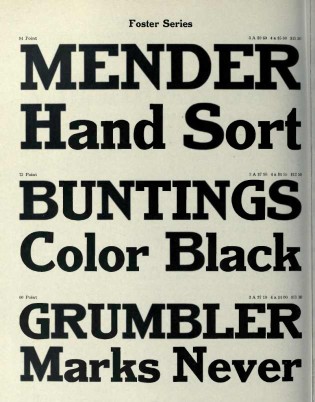 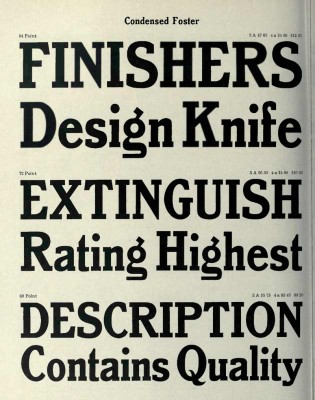