Faceted (or beveled) type has enjoyed a resurgence during the last couple of years. Detroit is an exceptional example from 2011. Among the faceted typefaces which debuted in 2012, my favorite is VALUCO.

I love its bold industrial look. Coming, as it does, from Aesthetic Apparatus — those champions and rescuers of found images and vernacular type from the mid-twentieth century — it’s no surprise that its letterforms are inspired by the gas-pipe lettering of the 1920s–40s. They also remind me of certain vintage store signs, still visible in a few Brooklyn neighborhoods, which grace delicatessens and luncheonettes. These signs also date from the 1920s, and usually have Coca-Cola signs on either side of the store’s name.

Of course, the other inspiration for VALUCO is the ubiquitous double-sided “Yes, We’re OPEN” / “Sorry, We’re CLOSED” sign. Aesthetic Apparatus famously parodied this American classic for a 2008 gallery show (see “Yes, We’re DRUNK” and “Sorry, We’re SORRY”, et al), and the mock signs were a hit.

Aesthetic Apparatus built the tints for the original signs with halftone textures. As they began to build the actual fonts, they realized that to keep the file size down they would have to replace the dot pattern with diagonal and vertical hatching. The latter (“Coarse”) is an extra option, with thicker lines for smaller or lower-res uses. I also have to mention the alternate characters that are available when you type certain lowercase keys — most of the gas-pipe letter shapes (‘A’, ‘K’, ‘M’, ‘R’, ‘S’, ‘W’, etc.) reside there.

All in all, VALUCO is a solid, satisfying design. It made me wonder if Aesthetic Apparatus has other typeface ideas in the works — and it seems they do: shortly after I finished writing this review, they released Brass Rule Script, another design inspired by industrial sources. 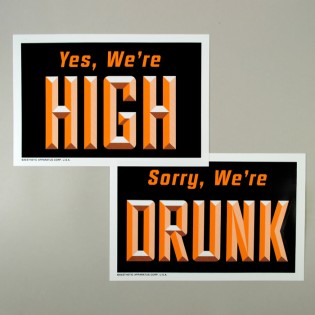 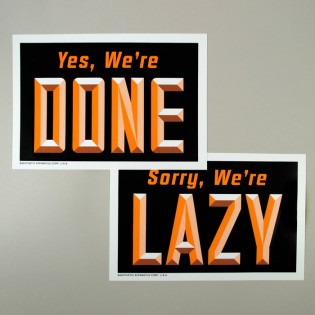