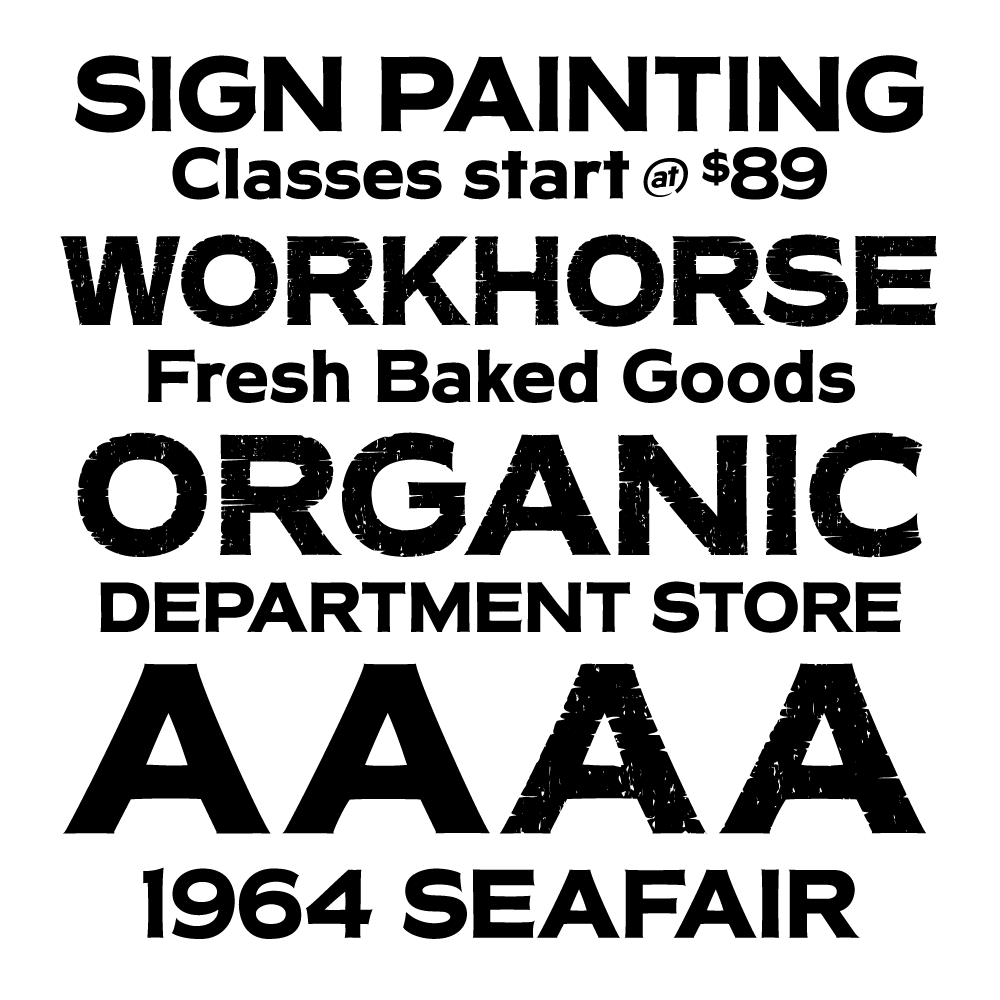 From the standpoint of sales, sans serif typefaces dominate the world of type in the 21st century. But as they continue to proliferate, it seems that font designers are working ever harder to find some small sliver of style space to call their own, often creating hybrids from the three basic categories of Grotesque, Geometric, and Humanist sans that are most notable for being instantly forgettable.

Not that many of these new sans serifs are bad; it’s just that they are not very memorable. They either seem so much like others being churned out that they are hard to keep straight or they have obvious quirks built into them to make them distinctive, quirks that are usually dumb or misguided.

Workhorse, designed by Seattle sign painter Greg Reid along with Charles Borges de Oliveira, is a sans serif that manages not to go straight to the mental wastebasket. At the same time, it avoids gimmicks in a vain attempt to grab attention. (In saying this, I am deliberately ignoring Workhorse Rough and focusing on the regular version.)

In the sign painting trade, this kind of sans serif used to be called an Egyptian or Block Letter Alphabet, a “rapidly executed” finished style, according to Frank Atkinson, that is as unpretentious as its name. Yet, it has just enough personality to prevent it from being overlooked. This can be seen in the lilt of the ‘S’, the abrupt “corner” on the right side of the ‘J’ where the stem meets the curve of the hook, and the tongue of the ampersand. But it is most evident in the tiny spurred corners that typify a sign painter’s Gothic, created by the act of squaring off the ends of strokes.

The contextual alternates in Workhorse are extremely subtle. Rather than distinctly different versions of a character, they vary only slightly (e.g., a longer curve on the top of one ‘S’ compared to another). These give Workhorse a real sense of authenticity, of having been written out by hand.

But my enthusiasm for Workhorse is limited to the capitals. In the lowercase, the crotches of many letters are clogged and both ‘m’ and ‘w’ are cramped. The latter is surprising since the capitals are wide, and thus there is no aesthetic reason to squeeze them. Some other letters simply seem out of place, such as the ‘u’ and ‘t’, which are closer to Futura in style than to an elongated Gothic. (To be fair, there is an alternate ‘u’ with the traditional leg.)

Reid’s Workhorse, despite its flaws, is a welcome addition to the overcrowded field of sans serifs. Used judiciously, it will freshen up any design. 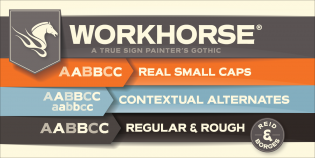 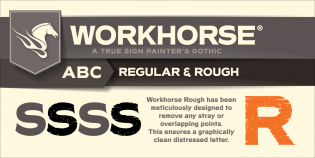