Ziza is the second digital font release to emerge from Mark van Wageningen’s ongoing experiments in constructing, deconstructing, and reconstructing type, exploring the connections between various type technologies and materials, and — most flamboyantly — revisiting and exploring the possibilities of color type.

These experiments began in earnest in 2015 with the Typewood project, in which Van Wageningen translated his display typeface Bixa, originally developed as a set of color fonts for the web, into a series of wood types for letterpress, and printed a series of posters inscribed with the texts of manifestos for his project: “Multicolor is the new black and white,” “Deconstructed chaos is the new visual order,” “Maximalism is the new minimalism,” and so on. Bixa was the jurors’ choice award winner among the dozen finalists in SOTA’s 2016 international protoType competition, displayed at TypeCon that year in Seattle. It went on to win a TDC Certificate of Excellence and a Silver European Design Award. The book Van Wageningen published to explain and display his visual research in greater detail, his Novo Typo Color Book (2017), won another TDC certificate and another European Design Award — this time, the Gold.

An early version of Ziza first appeared publicly alongside Bixa in the Novo Typo Color Book. In contrast to its older sibling, Ziza is a collection of fonts meant for smaller-size typesetting. It includes fifteen members: a geometric sans in three weights, the regular weight of which also comes with left- and right-side “deconstructed” versions, and the bold weight with a stencil version, itself with left- and right-side deconstructions; a humanist-flavored sans in one weight, and an ultra-high-contrast stencil serif, both again with their own respective left/right pairs of deconstructions; and, finally, what Van Wageningen calls a “construct” version, which uses thin strokes and larger filled areas to gesture at Ziza’s shared underlying letterform structures.

The fonts are meant to be used alone and overlaid with one another in any combination. Among their distinctive features are a recoiling upper stroke on the minuscule a, a descending main stroke on the minuscule f, a cropped upper arc and lower bowl on the majuscule G and minuscule g, respectively, and — my favorites — an eszett that resembles a medial-s / tailed-z ligature, and a minuscule q with a form that mimics the uppercase’s tail.

A designer could use the single-color (“full”) sans cuts for (let’s call it conventional) monochrome typesetting, but I think Van Wageningen would be disappointed by that choice. He engineered Ziza, like Bixa, for color. It comes in both OpenType and SVG formats explicitly with multichrome print and screen applications in mind, and the deconstructed versions of Ziza allow designers to explore color and contrast inside the glyphs, as well as at larger typographic scales.

You really have to see Ziza in full and multiple colors to appreciate it. And here it’s impossible to avoid plugging Van Wageningen’s just-published book, titled — depending on whether you’re reading the Hermann Schmidt Verlag or Princeton Architectural Press edition — Color and Type, or Type and Color. Like the Novo Typo Color Book before it, Type and Color is a thorough investigation of what Van Wageningen calls “chromatic typography,” a showcase of color and form combinations for Ziza’s family members (as well as for Bixa and an earlier design, Wolf) in their digital-offset and letterpress versions; following his translations of Bixa into wood type, Van Wageningen worked with the Lettergieterij Westzaan to produce metal versions of Ziza as well.

The book is also an accessible introduction to chromatic type design: using Ziza and the other fonts to illustrate his points, Van Wageningen covers the basics of creating and refining letterforms, color theory (all the color formulas used in the book are helpfully documented at the tops of the pages on which they appear), design software, file formats, and marketing and licensing. This is significant because one of Van Wageningen’s goals with Ziza and Type and Color, as it was with Bixa and the Novo Typo Color Book, is to encourage his readers to join him: to use color in typography themselves, to make and even distribute their own lettering and typeface designs, to test and (he hopes) advance his ideas.

Ziza is thus not just a family of fonts; it’s a hypothesis, a provocation, and an invitation. “Color will be the new italic; color will be the new bold,” writes Van Wageningen, and no less a typographic authority than the late Gerard Unger agreed with him that it’s at least possible. In the preface he wrote for the Novo Typo Color Book, Unger reminds us that many forms of typographic contrast we use now to organize text on the printed page and the screen that we take for granted, like style and weight, seemed like odd choices themselves to those encountering them for the first time. What authors, printers, and readers understand to be the bounds of the possible and intelligible has always changed along with printing technology and cultural experience. And in any case, typographers have never thought merely in black and white; color has always occupied their imaginations, even if only recent technologies have encouraged them to explore their ideas fully. In a world of screens with gamuts of millions of colors, who’s to say that Itten’s seven chromatic contrasts — hue, light and dark, cold and warm, complementariness, simultaneity, saturation, and extension — won’t join italic, bold, and other varieties of letterforms to signal different kinds of information? With Ziza, Mark van Wageningen presents us with an opportunity to explore that possibility ourselves. 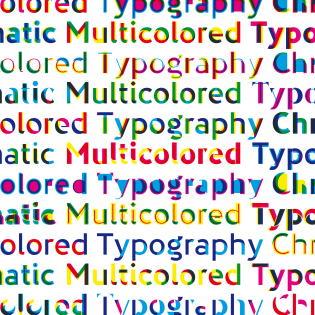 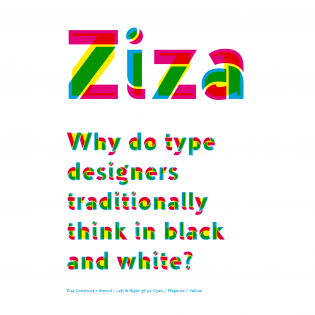 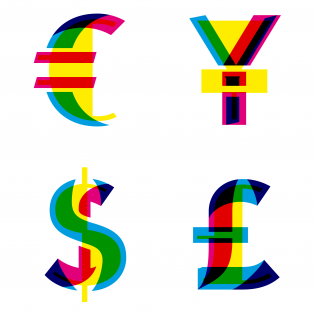 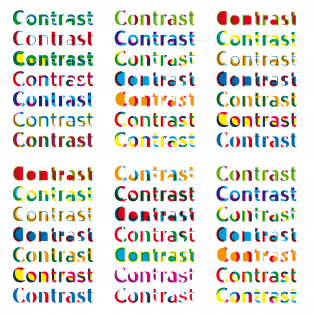