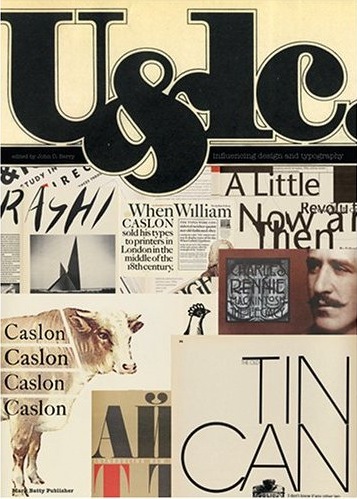 There are some things you just don’t throw away; World Series ticket stubs, Buddy Holly 45s, and old issues of U&lc magazine. Not only do these items mark moments of American culture, but they also embody unique collective experiences of time and place.

Right from its start in 1973, U&lc rocked the socks off graphic designers and type lovers across America and the world. Unlike many other design publications, it could not be bought at newsstands yet it cost nothing to subscribe to this quarterly magazine. I have not found any estimates of circulation during the earlier years, but at its peak approximately 200,000 copies were distributed worldwide.

The estimated pass along rate for U&lc was five to one, provided, of course, you could even pry a copy away from its owner. That’s what made each issue so special, not everyone had or could get a copy, making the subscriber “special” as well.

U&lc: influencing design and typography is a recently published book that chronicles the acclaimed magazine from its birth in 1973 through the last issue printed in 1999. John D. Berry, editor for the last two years of printed issues and creator of its companion web publication, U&lc Online, takes us back to the inception and raison d’être for the magazine.

From the beginning, ITC (International Typeface Corporation) founders Herb Lubalin, Aaron Burns and Ed Rondthaler, needed to promote ITC typefaces, and this new vehicle was to “soft market” the faces with a mix of flamboyant designs and intriguing content. It would have been a lofty goal anywhere else in the world. But this was New York City, the very center of advertising graphics and typography, and all of the ITC owners were very well known in this close-knit world of design giants.

With Herb as designer and editor, plus additional content by friends like Lou Dorfsman, Ernie Smith, Seymour Chwast, to name a few, the first issue was launched in basic black ink printed on tabloid sized newsprint. All of these alchemic ingredients blended with astounding results. As U&lc began arriving in mailboxes every three months, inspired readers grew into savvy in-the-know designers and more importantly, specifiers of ITC typefaces.

So began, the nearly one-hundred quarterly issues that changed typography and the business of selling type forever. The book itself displays all the U&lc covers in mini-gallery fashion on front and back foldout endpapers, and nearly 150 pages contain page spreads from selected issues of the magazine.

For those who have never seen an actual copy of U&lc, the page reproductions are quite good and even retain the yellow brown patina of aged newsprint, except shrunk down from the original tabloid size to fit the book’s 9 1/4 × 12 7/8 inch dull coated offset sheets.

The only shortfall that I feel about this book is that definitive spreads from each volume should have been distributed more evenly. The first ten years of U&lc only occupies thirty-four pages, and for some unknown reason Vol. 20, Nos. 1–4 span across eighteen pages of the book.

Which brings up what many faithful readers consider the most shocking of all U&lc issues — Vol. 25, No. 1, the infamous break from tradition. Berry describes in wonderful detail the events leading up to the 25th-anniverary issue. Just before he arrived as the new editor, the decision had been made to reduce the issues down from the large tabloid format to a more conventional 8 × 11 inch page size … the pre-shock to the earthquake.

He then goes on to explain how he and Mark van Bronkhorst, designer, had “hatched a subversive idea: to radically change the logo of U&lc.” In his article, Berry admits that nothing during his tenure as editor “created as much of a stir as changing the logo.”

In addition to Berry’s article on The business of type, there are stories by Joyce Rutter Kaye, Rhonda Rubinstein and Steven Heller, three veterans of U&lc, each bringing behind-the-scene views and insights into what made the magazine remarkable.

Towards the back of the book are two lists; one cataloging the contents of each issue, and the other listing editors and designers of each issue. Outside of a mysterious omission of Vol. 3, No. 1 on both lists (the issue did exist), I did discover something that was a disappointment to me.

I have for ages felt especially proud be an owner of U&lc Vol. One, No. One, intact with my personal mailing address and dated 1974. Whoops! Wait a minute … the reproduction from the book reads, “Volume One, Number One, 1973.” Both my copy and the book’s repro of Vo. 1, No. 2 are dated 1974, which means at some point between the FIRST printing of the FIRST issue of U&lc in 1973 and the printing of issue No. 2, there had to be another print run of issue No. 1, more than likely for an additional mailing.

What a bummer! I guess I just have to be happy that I still own a tall stack of yellowing issues representing the first ten years of the phenomenon known as U&lc. If you don’t happen to own any back issues, the U&lc: influencing design and typography book from Mark Batty Publisher is as close as it gets. Just be aware that your graphic designer friends will want to borrow the book, it’s all part of the U&lc pass-along readership legacy.