As someone who works with typography and design every day, I have a few books I turn to when I need to clear my mind of clutter. One of my favorites is Robert Bringhurst’s The Elements of Typographic Style, which includes this rumination on the sanctity of the title page: “Think of the blank page as alpine meadow, or as the purity of undifferentiated being. The typographer enters this space and must change it. The reader will enter it later, to see what the typographer has done.” Lines like this refresh my understanding of the task at hand and clarify my sense of purpose.

Explorations in Typography is arranged as a series of twenty-four chapters — the “explorations”. Using a short excerpt from Erik Spiekermann’s classic text, Stop Stealing Sheep and Find Out How Type Works, as a mantra, the book guides the reader through a kind of typographical meditation.

In 24 explorations spanning 188 pages, the Spiekermann text is repeatedly typeset, using a variety of techniques to indicate paragraphs and hierarchy. Each exploration shows several examples of a different method of indicating paragraphs in text (and a few later chapters explore different alignments and hierarchies). A new pair of typefaces is used for each example. A colophon and additional side notes about the typesetting and the history of the typefaces are included with each setting.

The explorations are thorough, covering typesetting techniques from the most basic (using indents, for example) to the unusual (using varying directions of text to indicate paragraphs). Typeface choices also range from classic to cheerfully odd. Throughout, the typesetting and page design remain austere and exemplary. As the author explains, the book is meant to further typographical education through an “extended visual taxonomy”, and the broad palette of techniques and typefaces is true to that spirit.

The book is primarily a teaching device, which de Bartolo created “specifically for more advanced typographic study”. She is serious about the book’s potential as a textbook, including advice for both teachers and students on how best to use the book. The depth to which the explorations go is beyond the interest of the non-designer and probably most neophyte designers. This is a book for people who care deeply about text design and typesetting — and for those who are required to care about it, in the case of students. For those of us who fit at least one of those descriptions, Explorations in Typography is a valuable resource, and a reminder of the extensive possibilities of digital typesetting. It’s also pleasing, and motivating, to page through the book and study the evolving settings of the text.

The book itself is a lovely thing. At 9.25″ × 12″, it’s large enough to house a letter-size page of typography plus annotations in the margins. The volume is casebound with thin boards and a sewn binding, so it’s sturdy but lightweight. The page design is clean and spare, with a transparent modular grid that provides a flexible canvas for the multitude of typographical settings. The text of the authorial voice is designed to guide the reader through the myriad design samples within. It’s a squeaky-clean, high-contrast treatment that presents a cool yet quirky sophistication.

My one complaint about Explorations in Typography is in its free-wheeling use of typefaces. No less than 171 different typefaces are used in the book — at least two for every setting. The type pairings are often interesting, but too often they distract from the typography itself. This is, after all, a book about fine typesetting, not a font catalog. I appreciate that the author included an appendix with a page of advice about choosing typefaces and a complete list of fonts used. But I often wondered whether the book would be improved by simplifying the type. To go to the opposite extreme, what if the exercises were all set in the same serif text face, with one sans face chosen for the headlines? Or choose five or six pairings. In either case, the particular typefaces chosen would be less important than the restraint itself — a book such as this, which seeks to show a variety of typographical tools through demonstration, would be well served by a solid, unchanging typeface selection. The typesetting would then be seen clearly as typesetting, free of the distractions provided by a new pair of fonts on every page. Additionally, the fonts, nearly all of which are drawn from the FontShop catalog, are mostly of the modern, late-20th-Century variety, a choice that will give the book a dated appearance in short order. Exercising some restraint on typeface usage would not only serve the book’s purpose, it would serve its continuing relevance.

The book’s companion website is as well designed as the book, in form as well as function. The site provides information and examples from the book, and includes a terrific and easy to use interactive page that allows the casual user to try out some typographical explorations of her own.

Explorations in Typography is a well-conceived, well-designed book that fulfills its goal. It is a unique and valuable catalyst of typographical contemplation. In addition, it’s a solid teaching tool, and a worthy addition to the libraries of design studios, type enthusiasts, and design instructors. 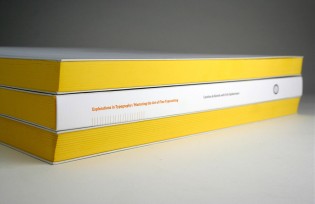