Fraktur Mon Amour is the work of Judith Schalansky, written while she was a student of the Communication Design program in Potsdam. She developed a serious passion for blackletter and was disappointed to find all the reference books about this fascinating genre are very dated and often quite staid, and in many cases not easily available.

Judith started to search for blackletter typefaces that are available in digital form. She soon discovered hundreds upon hundreds, lots of them being true creations of the digital age which haven’t been featured in a type book before. Hence, Judith compiled her own collection. The outcome was published by Hermann Schmidt Mainz in 2006. Now, a second, revised and enlarged edition is available.

The layout and the typography is more conventional: the accompanying texts are set very well in FF Profile. There’s an introduction with a brief history of the genre, some thoughts on its difficult image and its role today, plus a few descriptive words at the beginning of each chapter: Rotunda & Bastarda, Textura, Schwabacher, Fraktur, Decoratives & Initials, Modern, Contemporary, Display. All those texts are bilingual. The English translation was provided mainly by Jay Rutherford, a Canadian expat who is professor for typography at the Bauhaus-Universität in Weimar.

With as many as 333 featured typefaces — 64 of them newly added — it was a good idea to attach a triple index: by typeface name, designer, and foundry. The range is wide. Fraktur Mon Amour has the classics like Wittenberger, Goudy Text, Rudolf Koch’s Wilhelm-Klingspor-Gotisch; along with more contemporary faces like Lucida Blackletter, Letterror’s FF Brokenscript or San Marco by Karlgeorg Hoefer; as well as fresh additions including Blaktur, Fakir, and Darka. Several fonts debut exclusively in Fraktur Mon Amour, or, like Tim Ahrens’ Herb, haven’t officially been released yet.

The “Modern” chapter contains a number of entries that I wouldn’t classify as strictly blackletter: Eckmann, Fanfare, Banco. However, I think the inclusion of those “greyletter” designs is reasonable: the boundaries are not that sharp, especially when it comes to written forms. Large parts of “Contemporary” and “Display” aren’t worth a long look; dozens of grungy free fonts and PoMo exercises in deconstruction that I am honestly not that interested in. Then again, some intriguing insights into unexplored terrain: blackletter pixel fonts and textura FontStructions — modular renderings of medieval forms, not dusty reactionary but rather cutting-edge hipness. Two ribbon page markers help navigating the tome.

Each typeface is presented on a double page. The recto shows the character set; upper- and lowercase alphabet, umlauts, alternates and ligatures (if present), a few special characters including punctuation, and figures. In some cases, there’s an accompanying style; a bolder weight, a swash variant, or even an oblique. That secondary style is not shown in full, only a handful exemplary glyphs are included. Below, there are three lines of continuous text set in a smaller size, with the wording carefully adjusted from page to page, in order to integrate each typeface’s special features, like ligatures or matching Lombardic caps. The point size always is stated: the character set is shown at a size of 30 to 40pt, while the text settings vary from 9 to 14 pt. All in all, the specimens are pretty useful.

The verso is the playground. It is filled with a kaleidoscopic pattern made from repeating letters of the respective font. While that may look nice, those pink-and-black arabesques don’t make much for me. After having looked at the first twenty or thirty of those ornamental textures, the typographer in me wished that space had been used for something less contemplative and more useful: background information that goes beyond the minimum data — designer, foundry and year of release — like a list of significant usages, or specifications regarding the language support. On the other hand, I can understand that this rather pictorial half of the book, together with the unconventional color, helped to address a wider — and different — audience. Introducing novices to the beauty of blackletter and tempting them to take a closer look is not the worst goal to strive for, I guess.

The appendix, in turn, is very informative. Friedrich Forssman, author of Detailtypografie, explains all the ſpecial rules that need to be considered when typesetting blackletter text. Also, a few books are listed that invite further reading.

The book comes with a CD, packed with 150 fonts — often “free for personal use, not to be used commercially”. A great deal stems from Petra Heidorn’s, Manfred Klein’s, and Dieter Steffmann’s large collections — digitizations both of well-known classics and obscure display gems, of mixed quality. That doesn’t mean they’re all trash. Most of them can’t compete with the commercial offerings of professional foundries, and I won’t recommend using these fonts for an elaborate blackletter project. Still, it’s nice to see this digital addendum. Having access to these fonts helped me to quickly explain the differences of Schwabacher and Fraktur to my students. And the CD holds some really nice surprises in store, too: Georg Seifert’s attempt at a modernized-yet-unromanized Fraktur, RosenRot, and its monolinear companion Rostrot — to name but one example.

Blackletter is alive, and it ain’t a zombie. Fraktur Mon Amour is both a document and a promoter of this resurrection. 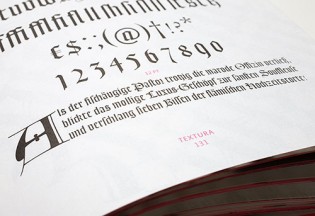 Blackletter is alive, and it ain’t a zombie.

The recto shows the character set; the verso is the playground.