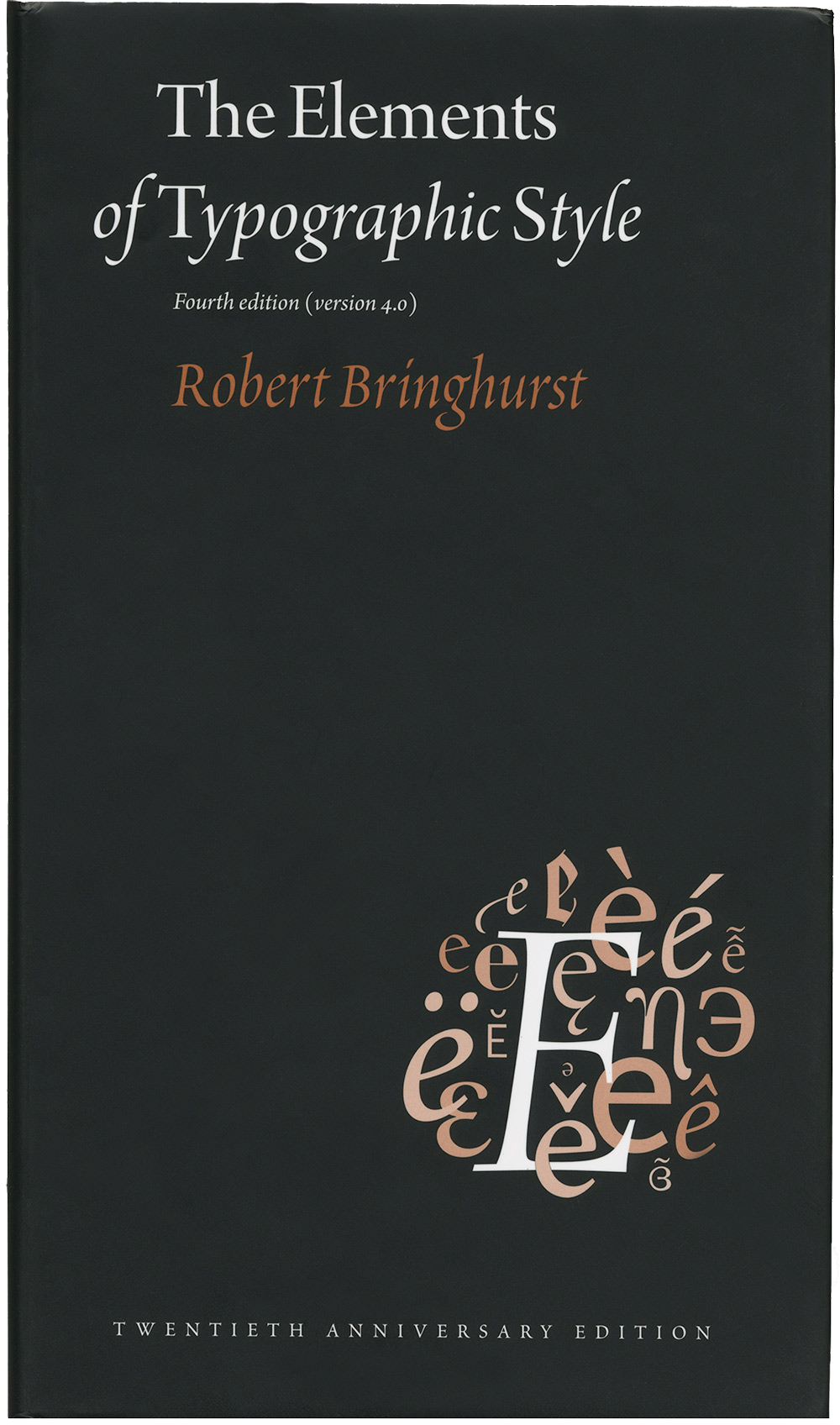 Robert Bringhurst has issued the latest edition of what Hermann Zapf called the “Typographer’s Bible”. The news will surely be welcomed by his ardent followers, but does the book speak to a modern congregation?

In 1992, when the first edition of The Elements of Typographic Style was published, Bringhurst was already an accomplished poet and translator of poetry — most notably Haida poetry, but also Navajo, Greek, and Arabic — into English. He was also a self-trained and accomplished book designer, and Elements was his attempt to catalogue and summarize the best practices of book typography and design, loosely according to the model provided by the book’s namesake, The Elements of Style by William Strunk and E. B. White.

The book was a huge success. Four subsequent editions were published, labeled (somewhat incongruously, given Bringhurst’s approach to typography) versions 2.0, 3.0, 3.1, and 3.2. Now, on the book’s twentieth anniversary and eight years after the last release, a version 4.0 has appeared.

It’s hard to overstate the reputation Bringhurst and his book have gained in the typographic community. It didn’t hurt that Zapf blurbed the book’s first edition by calling for the book to become the “Typographer’s Bible”. More recently, Hoefler & Frere-Jones have called Elements “the finest book ever written about typography”. It appears on countless syllabi and reading lists, and is one of the “triumvirate” of type books still recommended to beginning typographers and designers, along with Alexander Lawson’s Anatomy of a Typeface (1990) and Walter Tracy’s Letters of Credit (1986).

What accounts for the lasting influence and popularity of Bringhurst’s book? Besides the handsomeness of the book itself — Bringhurst continues to enjoy the support of his publisher, Hartley & Marks, with his standards of book design and production — there are three reasons: the range and depth of his treatment, the quality of his writing, and the confidence and generosity of his tone.

Bringhurst’s scope is wide: the fundamentals and finer points of macro- and micro typography, type anatomy and classification; choosing typefaces and page formats; the use of diacritics and other analphabetic symbols (no doubt his experience as a translator of languages that rely on extensive diacritical support in the Latin alphabet has sensitized him to these matters); annotated lists of designers and foundries; glossaries of glyphs and terminology; and more. Besides distilling centuries of typographic expertise, his treatment of it is remarkably thorough: he doesn’t pretend that his book is an exhaustive account of typography, but his care and attention to detail is obvious (in places even overwhelming). And all of it is supported by well-made illustrations and diagrams. It would be hard to find another writer in English who commands as much knowledge about the use of writing and print to capture language as Bringhurst does, and that he can condense it into 398 pages (in this edition) that many people will read (once more) from half-title to colophon is impressive.

The quality of Bringhurst’s writing allows him to pull this off. Knowledge, experience, judgment, and enthusiasm are not always accompanied by writing skill, and like many academic and quasi-academic fields, typography is not flush with talented prose stylists. But the fact that Bringhurst came to book design and typography from poetry is evident on every page. He is a gifted author used to making every word tell, and his prose is (to borrow Robin Kinross’s description from Modern Typography) “serene” and “incantatory”. He finds words that capture — more completely than practically any of us can muster — why typography matters. This is most simply and succinctly evident in “first principles”: “Typography exists to honor content.”

Finally, Bringhurst’s writing is a perfect match for his tone. The Elements of Style is actually a poor model for advice and guidance of any sort: Strunk takes an important insight (that writing should be as considered and economical as possible and appropriate) and worries it into dozens of ponderous, crabby, and often questionable commandments. Fortunately the similarities between that book and Bringhurst’s end with the title and the numbered divisions. Even at his most direct, and despite the fact that the book does have the feel and structure of holy writ in places, Bringhurst’s tone is moderate and reflective. His confidence never drifts into arrogance, and his traditionalist roots don’t prevent him from acknowledging that contemporary themes, subjects, and standards call for contemporary type treatments and approaches. Conservative, yes, but conservative in the style of Edmund Burke: you change what you must to preserve what you can.

None of this will be news to most readers here. But all this being said, is the arrival of a fourth edition of Elements something we should celebrate?

Bringhurst has probably taken a book grounded in print typography as far as it can go. But it is, still, grounded in print. It’s hard to believe that a book revised five times in the last twenty years mentions the World Wide Web exactly twice (if you’re willing to accept a mention of “hypertext” for one of them). And don’t look in the index for those passages, because “World Wide Web”, “web”, “webfonts”, “online publishing”, “internet”, “HTML”, and “CSS” don’t appear there. “E-books” does have two entries. “Linotype machine”, by contrast and with apologies to Doug Wilson for saying so, appears twelve times. (“Monotype machine”, in case you wondered, appears four.)

This doesn’t mean Bringhurst’s book is obsolete. After all, there’s no mention of the web in Lawson’s or Tracy’s books, either. Nor will you find any in the books of Jost Hochuli, Willi Kunz, Hans Bosshard, Carl Gerstner, Emil Ruder, Helmut Schmid, Geoffrey Dowding, Nicolette Gray, Daniel Berkeley Updike, Stanley Morison, Beatrice Warde, Jan Tschichold, or Eric Gill. And Giambattista Bodoni didn’t mention the Linotype machine, or even electricity. That doesn’t mean we have nothing to learn from them, that they don’t belong on the bookshelves of an educated typophile. There are principles of good typography that transcend substrates and technologies.

But all these books are products of their times and contexts, and we must read them that way, Bringhurst’s book included. The only new section in version 4.0 of Elements is a two-page examination of metal type (pgs 300–301). “To think about type”, he tells us to introduce the section, “you have to think backwards and forwards at once.” Well, yes — if you’re setting metal type. But virtually all undergraduate designers and typographers presently in school will never do that — in quantity, anyway, if at all. (It’s actually more likely they’ll set wood type.) That’s not to say that it’s a good thing they won’t, or a bad thing, simply that it’s true. So why do we recommend to them as a central text, as so many teachers and type designers do, a book that, for all its qualities, has an easier time thinking backwards?

Of course, students in any field involving typography should read it — must read it — but not first, and certainly not by itself. And not just because it’s grounded in a world of print. Display typography, which surely demands the same care that book typography does, is also nearly completely absent from the text. Even his consideration of type on the screen, smart as it is, is limited to two pages and five paragraphs.

More importantly and generally, though, and notwithstanding its range and depth and the generosity and precision of its advice, Elements is far better at exploring the meaning of good typography, at describing outcomes, than explaining process. The debates that brought us to what we value in good typography, the questions that remain contested, the actual means of translating principles into practice for students, are not here. And shouldn’t necessarily be. Bringhurst is the unofficial poet of typography, and a great one at that. But what I learn from Robert Frost is the meaning of woodcutting, not necessarily how to fell a tree or stack a cord of firewood.

The book isn’t without practical advice and we are fortunate that it delivers what it does. But unless Bringhurst plans a considerably expanded version 5.0 that focuses as much on web, mobile, and display typography as it does on the world of books, he should let Elements be what it is: a wonderfully written and wise summary of the world of typography as he found it. Surely others inspired by the world his text reveals to us, the beauty of his writing, and the thoughtfulness of his approach, can take it from here.

New for version 4.0: gold foil stamping instead of silver.

Bringhurst has included the original Japanese and Italian texts for his opening epigraphs.

Still sticking with his own typeface classification, including “lyrical modernism”. 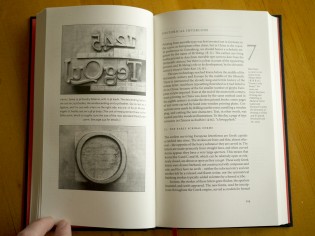 A few new illustrations here and there, such as this one to start the “Historical Interlude”.

New in the serif specimens: Arno, plus Arno Greek and Cyrillic. (But still no Arnhem?) 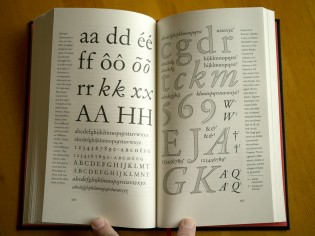 Expanded and illustrated comparison of different cuts of Garamond.

Palatino Sans, the only new sans face in a section still overshadowed by the serifs.

The only new section in version 4.0: a two-page spread on metal type.