Just when we thought Dala Floda – Paul Barnes’ crisply contemporary humanist stencil of 2010 – was an original and pretty crazy idea, here is a dazzling display variant that replaces Dala Floda’s solid forms with a set of tapering stripes. It’s so fresh and exciting it’s almost hard to believe it exists.

Dala Prisma’s release was met by a cacophony of enamored cries in the typotwittersphere — “an incredible feat”, “friggin’ amazing”, “rare type crush”, “sex for the eyes”… For me too, the choice for “favorite 2014 release” seemed obvious.

Barnes has taken cues from striped typefaces of the 19th and 20th centuries and transposed this styling idea to Dala Floda’s crisp Renaissance-inspired structures. Such diverse historical echoes notwith­standing, the result radiates an almost shocking contemporary sophistication. The stripes, so precisely drawn they’re dazzling, swell and taper with the strokes, bringing them to life. The circular ball term­inals transform into delightful marbles. The combin­ation of open inlines with stencil forms makes for an elegant, shimmering airiness rarely seen in type.

And there’s so much of it, too. Dala Prisma comes in a Roman with three lines, a Bold with four, and a Fat with five — all accompanied by italics. And they’re not just little display alphabets, but madly complete, featuring small caps, ligatures, swashes… Besides typophile drooling, this wealth of jewel-like glyphs elicits a certain incredulity. How can this even exist?

The execution comes down to Ben Kiel’s masterful (and, it shows: joyful) handwork, aided by smartly harnessed automation. Frederik Berlaen was brought into the process early to program a custom tool (“no magic, no glam rock, just 80 lines of code in RoboFont”) that took care of dividing the shapes into regular stripes. This sped up the process and enabled exploration of variants, as Kiel tells it. The time is surely ripe for such techno-ornamental experimentation, as spearheaded by LettError’s programmatically striped Federal in 2000, and followed in early 2015 by H&Co.’s super-elaborate, custom-coded Obsidian.

But if code made Dala Prisma possible, craft made it beautiful. It does not look “generated”, the effect not like a simple filter; it took thoughtful manual fine-tuning to make the stripes work ideally across all glyphs (on a standard 1000-unit grid, no less!) and deeply integrate them with the lettershapes. It is thus by a rare confluence of a strong design concept, openness to experimentation, conscious automation, and meticulous craft that Dala Prisma has become a truly impressive achievement. 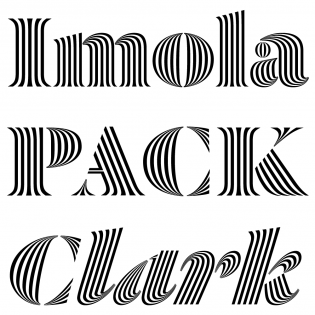